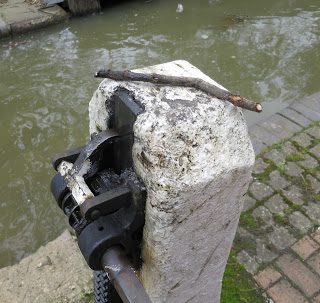 All the lock workings have been greased recently and there is grease all over the locking mechanism, so when you touch it you also get covered in grease.  Someone came up with the great idea of using a stick to flick the lock up or down and left it on the top of the paddle gear.  It caught on and most of the stands now have a stick on top.  Now why didn't I think of that?

Then it was on to Banbury where we arrived at 1145.  David went off to do some shopping but I had to return to the boat.  I have had a bit of a tummy problem and cannot go far from the toilet.  I also had excruciating pains in my legs and could hardly work for a short time.

So, after Banbury we stopped between the two lift bridges just outside the town. 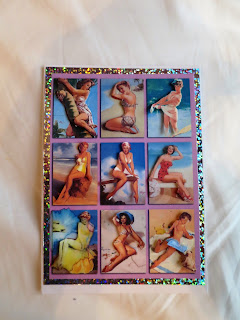 This was David's Birthday card last year.  I found the pictures on the internet and printed them out 3 times.  I matted one set of pictures onto some lilac card and matted that onto holographic silver card and then onto a white card blank.  I cut out details of the pictures from the other two copies and decoupaged them onto the base pictures.
Posted by Brenda Scowcroft at 17:39