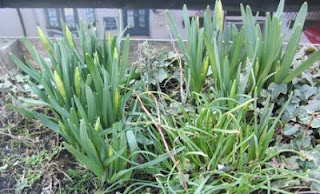 Spring is in the air!!

Some of the moorers spent the afternoon sat outside, in the sunshine, around the table drinking wine (and tea) this afternoon - one dressed only in jeans and a t-shirt!  There was ice in the water when we woke up this morning too.

Won't be long until we are off on our first cruise of the year.

Walking down Farmers Locks the other day I noticed this new lock beam. 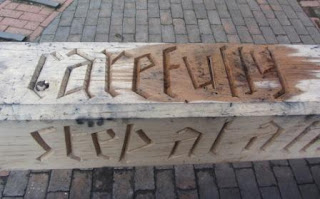 One of those with a poem carved on it. 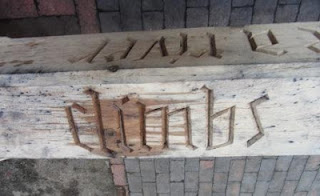 I couldn't understand it, but perhaps that is because I am a Philistine.

But I can't help thinking that if I'd carved out a poem it would have been considered vandalism. 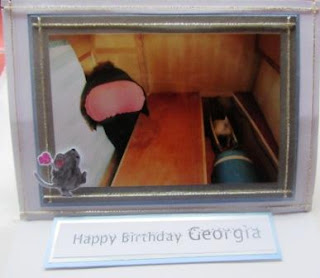 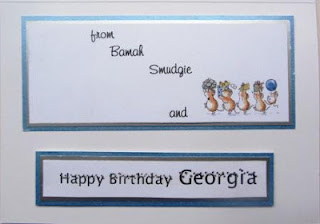 Cathy had a mouse on her boat - see Towpath Telegraph for whole story.  David took this picture of her looking for it.  On the right is Smudgie the dog looking too, so there are two "fat" bums in the picture!!


So for Cathy's grand-daughter's birthday I made this easel card.

I matted the photo onto silver card and used a punch to stamp out little squares in the corners so I could wrap the silver cord around it.  I then matted that onto light blue card and then onto the white card blank.  I added a mouse with a baloon walking across the bottom of the picture.

Inside, I really went to town with the mouse theme.  I printed out the sentiment ad added some clip art mice which I matted onto silver and blue card.

Then I printed out another sentiment using a font that had footprints along it and matted than onto silver and blue card  I fixed this one with sticky fixers to make it stand up so that the front of the card could rest against it.

Both Cathy and Georgia thought it was hilarious.  So I must have got something right.
Posted by Brenda Scowcroft at 20:38 No comments: 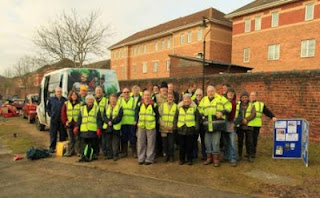 We took the boat to Hockey Port for the BCNS Cleanup Day.  It was easier to take the boat than catch a couple of buses to get there! 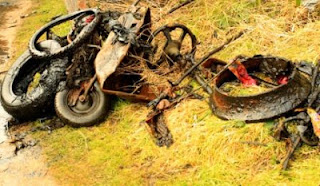 It was a beautiful sunny, almost warm, day and we managed to dredge up quite a collection of objects. 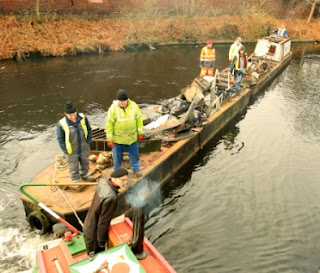 Phoenix (I think) broke down so the butty tug had to be towed by another boat.  Great fun getting them all through the bridge holes.


Our plans for this year's cruise are all in disarray.  I spent a whole afternoon plotting out a route over the Pennines (Huddersfield Narrow) and back on the L&L to Liverpool - avoiding Dutton as it won't be finished in time when we leave and the very next morning we received an email letting us know that we could cruise the Basingstoke Canal at Easter.  An opportunity not to be missed.  Will we ever get on the Huddersfield Narrow? 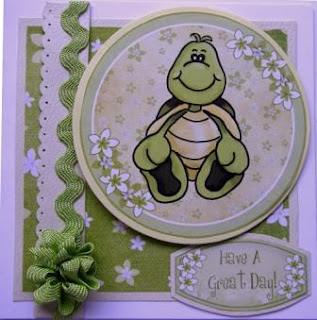 I was going to upload David's 2013 birthday card, but I haven't photographed it yet.

So here is a card I made earlier.  The papers came from Making Cards magazine.

I covered a square piece of white card with green backing paper and stuck it onto a square card blank.  Then I added a strip of white card with one side decorated with a Martha Stewart punch.  Green ric-rac was wrapped around this and fixed on the back before sticking it to the left hand side of the card.  The topper was matted onto a pale yellow circle and stuck down with sticky fixers.  The sentiment was also matted onto pale yellow card and added under the topper on the right hand bottom corner of the card.

To finish of I made a "flower/bobble" by running small stitches along a length of ric-rac and pulling it tight, then fixing the edge together with small stitches before sticking it down with a glue dot.
Posted by Brenda Scowcroft at 16:50 No comments: