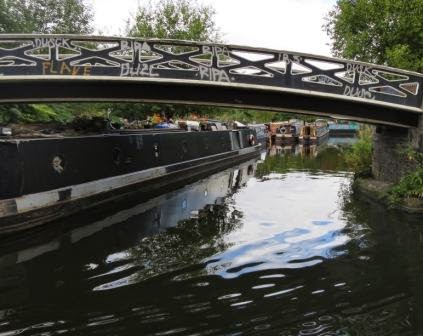 We are off......  The water tank has been repainted, the satellite dish has been removed and all the other little jobs that have kept us stuck in Birmingham have all been done.  Yesterday was the day were were leaving, but then we were asked to babysit our grandson, so it was postponed yet again - couldn't miss a day with him.

We were due to go down Farmer's Locks but when I woke this morning, after a bad night; and the lack of sunshine, we hung around until 11 o'clock and finally we were on our way.  But not down Farmer's - decided to go clockwise instead so heading to the Staffs and Worcs, T&M, Coventry and back up the Birmingham and Fazeley.

The sun came out and the cruise along the Main Line was almost uneventful.  Only one stop to clear out the weed hatch.  That must be a record.

As we passed the transloading basin we noticed it was now full of boats. 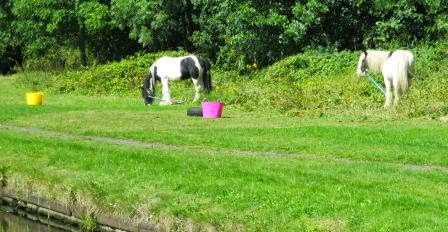 These horses had been tethered on the towpath, must have been a common sight at one time.

And then when we went past Caggie's it looked closed, no signs, very quiet and not many boats. 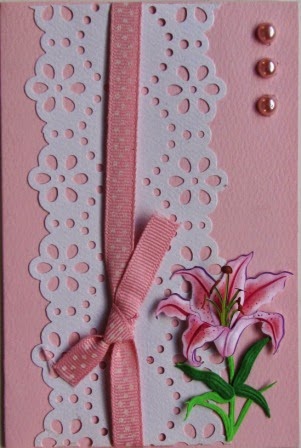 I have had an order from Scotland for 160 Christmas Cards and another 50 greetings cards.  So it's been heads down for a while now.  I have done the first 100 so still lots more to make.

This carad was nice and easy, I cut the white card with a Martha Stewart border punch on both sides to make it look like a ribbon and then wrapped the pink spotty ribbon around it and tied it in a knot before sticking it down onto the pink card blank.  The lily topper was added with foam squares and three pink pearls were added to the top right hand corner.
Posted by Brenda Scowcroft at 20:35 No comments: