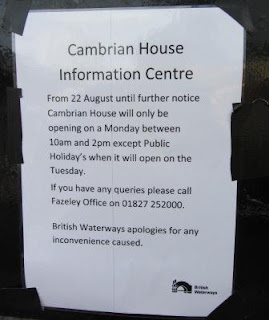 Customer Services?
I started swimming again two weeks ago and am absolutely knackered when I get back, so that's the excuse for not blogging this time.
Lots of things have been going on too, so I'll have to catch up.  Last weekend it was the LibDem Conference - the policemen are to protect us from a demonstration.  At one stage there were about 40 on or around the bridge. 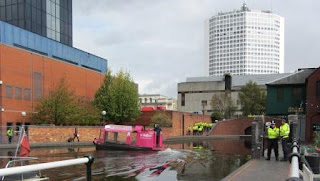 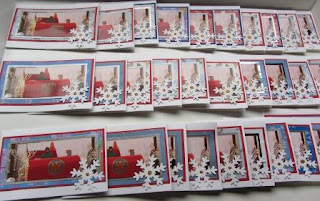 My first Christmas Cards.  As they were playing Carols in Harvey Nicks on Tuesday I think it's OK to show them.  They are for Richard, the engineer at Sherborne Wharf.  Not a very happy Elf. 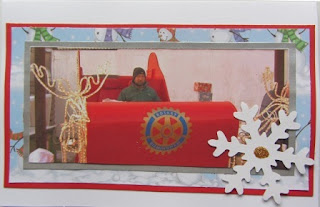 I matted the photographs onto silver card, then onto patterned backing paper and then onto red card before sticking it onto the white card blank.  The only extra decoration was the snowflake punched from white card and a gold dot of glitter glue.  Of course the punch I had kept sticking and I had to buy a new one and could only get a larger size which is a bit too big for what I wanted.

Posted by Brenda Scowcroft at 21:34 No comments: There is a boat under there somewhere!


The plan had been to set off to join Wildflower for a trip down the River Nene but stuff happens.

Firstly, David contracted an infection in the retina of his right eye and was seeing spots (he still is) and then there was the hole in the calorifier.

Of course, the 1 week wait for the new calorifier stretched to 2 and then it was the Bank Holiday etc, etc.  So we took the boat around to Sherborne last Tuesday for the new tank to be fitted.  This was surprisingly straightforward.  Then the water pump wasn't suitable, so we had to buy yet another one.

So, off we set back to the moorings.  There engine overheating alarm was going full time.  There were lots of boats around the Worcester Bar, so we had to go past the mooring and up to Salvage Turn to wind.  On the way back there was an explosion from the engine and boiling water and steam everywhere.  One of the hoses (new ones fitted in February for the Safety Check!) had burst.

So Richard was back on Wednesday to fix the new hose and yesterday we went for a trip around the bay (to The Vale and back via Sherborne Wharf) to check out the engine.  Fingers crossed, all seems well. 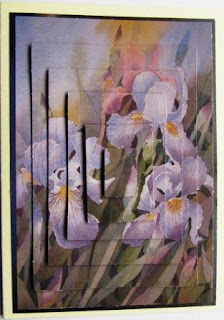 When I get a card magazine I usually squirrel away any free gifts instead of using them up straight away.  Anyway, sorting out my stash before I went on holiday I came across a couple of pretty flower piramidges (is that the right word?).  I used sticky fixers to mount the pictures and matted the whole thing onto some silver card.  Then I just fixed it to a white card blank.  The mount was too big for the 6x4" card for any further decoration, so I just left it as it was.


Posted by Brenda Scowcroft at 11:28 No comments: 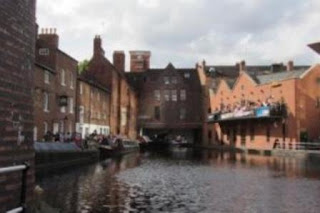 After arriving back from Spain almost the first thing I did was put the washing machine on.  Nothing unusual in that.  The next day the washing machine didn't sound right.  Then the water pump kept on working after the taps were turned off.  Then, while the water pump was working we could hear water running somewhere in the back, though on inspection it seemed to be coming from the hot water tank overflow into the canal.

A couple of days later we noticed we were listing rather alarmingly and then discovered about a foot of water in the bilges!!!

Water was pouring from the calorifier.  So it was a trip around to Sherborne Wharf, where Richard did a botch and tried to fill in the leak.  This didn't work.  Of course, you can't just buy a replacement calorifier - for some reason they don't make them like that any more.  So a new one had to be built.  Should have it in a week!

Great!  No running water for a week.  Don't you just love boating? 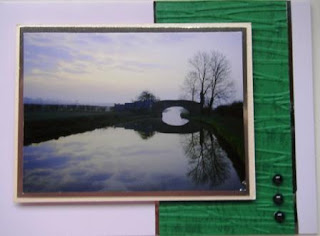 A lovely atmospheric photo of a canal bridge in very early spring.  I matted it onto silver and white card.

The green panel was Cuttlelbugged and matted onto silver card as well and then fixed to the right hand side of a tent fold white card blank.  The photo was added and three black "pearls" were stuck down the right and side of the green panel.
Posted by Brenda Scowcroft at 10:49 No comments: