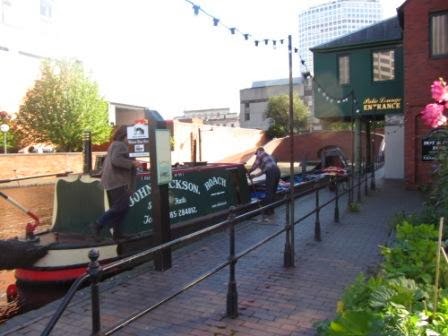 Yesterday the coal man came and delivered 40 bags of coal for us.  Delivered in the dark and in the rain.  Now there's dedication.

Today the boiler burst at the back of the Becton fire!  Lots of water, and as the fire was going, lots of hot coals too.

We just got it sorted and put the electric heater on and the first flake of snow landed on the window!!  Was there a better day so far this year for the heating to go off?

Richard was summoned from Sherborne Wharf and he helped David drain all the radiators so that we have a usable fire, just no hot radiators.  We will need a new boiler and all the piping checked before we can have a toasty warm boat again. 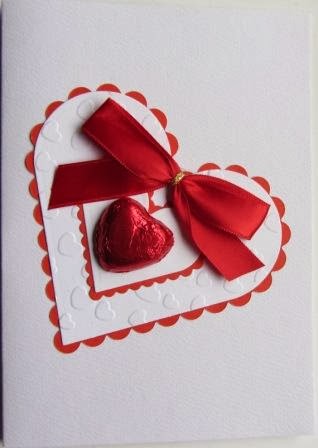 Another Valentine card with a chocolate heart.  I have already eaten all the spare ones.

This one is made up of two, white Cuttlebugged hearts matted onto red scalloped hearts and a red bow.
Posted by Brenda Scowcroft at 18:14 No comments: 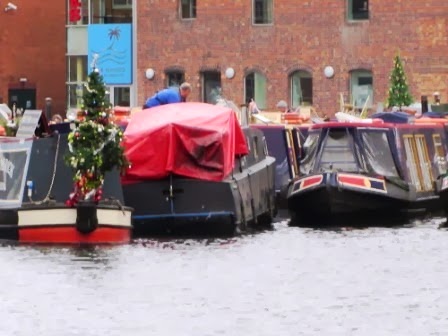 Just before Christmas there was lots of excitement when a boat that had been moored by Bobby Brown's was liberated overnight and ended up stuck between boats on the moorings. (The one with the red tarpaulin on the back.) No one seemed to be aboard and CRT would not let anyone move it until their operatives arrived.

The boat was eventually returned and moored back by Bobby Brown's and still there were no signs of life from inside the boat.  Was there a corpse inside?

Who knows, the boat dissapeared during the day, so I suppose we'll never know.

We went to the first Boaters' Meeting with CRT and Richard Parry.  Blimey, are things changing.  He actually stated that as we boaters had invested so much into the canals that we should have priority over other users!!!  Still, time will tell. 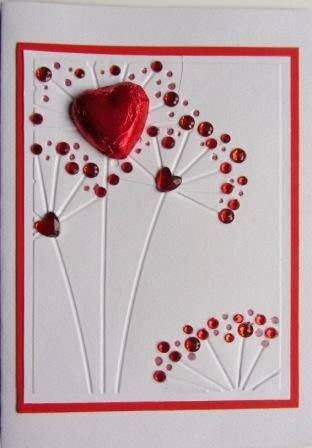 Getting close to Valentines Day.  I have uploaded this year's lot on the For Sale Page if you're interested.

This one has lots of red gems and hearts stuck into the embossed flowers and a chocolate heart in the middle of the big one.
Posted by Brenda Scowcroft at 14:35 No comments: 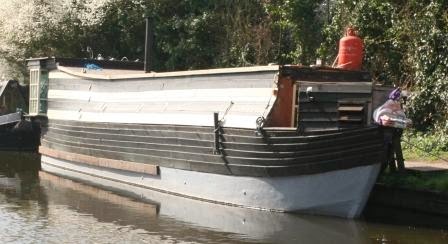 Last Thursday we watched an interview being conducted on the bridge.  The interviewer and cameraman then came down to the boats and David started chatting them up (as he does).  Anyway, a cup of tea later he was being interviewed too.  He went out on the 6.30 West Midlands News that night.  Just 5 seconds at the beginning and a shot of the bow of Mr David at the end.  Fame again. 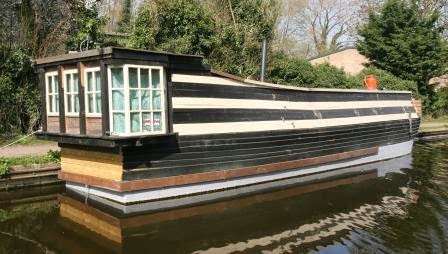 Here is a boat we saw on the Grand Union a couple of years ago.
Don't know where the masts are. 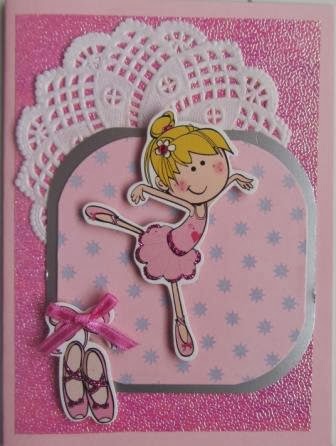 This is a "pink" card, a girlie card.  I took a pink card blank and made a panel with shiny vinyl sticky back paper.  I punched out a square of pink and silver spotty paper and a larger one in silver and rounded the corners. A small white doily was stuck to the back and the spotty matted panel on top.  The ballet dancer and pumps were then stuck on top with sticky fixers.
Posted by Brenda Scowcroft at 19:10 No comments: 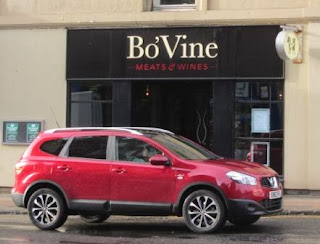 A photo apropos nothing really, I saw it in Glasgow last year and thought it a great name for a shop selling meat and wine.

The New Year went off with a bang!  We got  fireworks this year (after getting none last year).  Is there another mooring on the system with virtually its own firework display?

Later on Frederick had its back doors gemmied
and a generator was stolen.  And, yes, the the gates were locked.

The wind was so bad the next night later that it blew the two "24hr" signs off the mooring posts (but not the 4 others).  That meant that the boat that had been on the moorings since way before Christmas could now claim he was on a "14 day" mooring.  Coincidence? 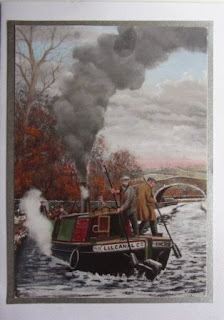 We are planning our cruising this year and the Leeds and Liverpool are part of them.  So here is a card made with a postcard of an old working boat, I think at Bank Newton.

It is lovely around there, but there is never anywhere to moor overnight.  Last time we went through there was a huge leak from the canal and water was pouring down the car park by the cafe there.

I mounted the postcard onto some silver card and then onto a blank card base.
Posted by Brenda Scowcroft at 17:59 No comments: