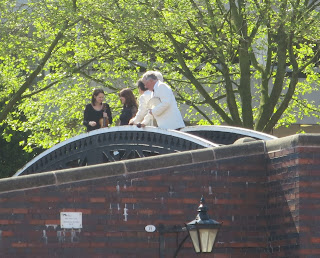 Well, we are back!  We left around 0900 and headed back to Oozells Loop.  We met lots of hire boats all the way back which meant there was plenty of moorings when we got into Birmingham.

We moored up and walked over to the Hyatt hotel for a swim and shower and then onto the moorings to see what was happening.  Nothing yet.

After lunch we had a text to say the electricity was back on, so we came back here.

As usual, when the sun comes out, there were lots of visitors, including a band/ensemble complete with brass and string instruments and white tuxes.  Later some long haired older men, two glamerous older ladies with American accends.  Looked like an old rock group, but I didn't recognize any of them and cannot find out if they are playing anywhere tonight. 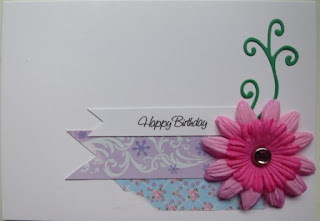 This is a card I made for a shop in Edinburgh, I made a banner from the sentiment and then two with washi tape.  The green flourish was die-cut and the flower is made of fabric and a gem.  Thats it, all on a blank white card base.

Posted by Brenda Scowcroft at 17:44 No comments: 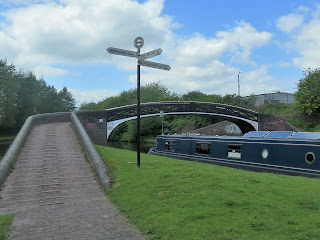 Sorry for being quiet for so long, but we have been in the Basin all this time and there has not been too much to report..

We finally got out onto the cut again, though only temporarily.  The electricity went down on the moorings and CRT brought generators for those who needed them.  Unfortunately our neighbour decided he did, and then ran the thing until 0930 last night.  It started up again at 0830 this morning, so we decided to move to somewhere quieter.

Only a short trip and very quiet, saw only two boats go past and we were joined by another boat mooring opposite later on in the evening.

I will try and update last year's entries eventually.

It was lovely to be out again, got to smell the heavenly hawthorn blossom, thought I was going to miss it this year.  The bluebells were just over thought. 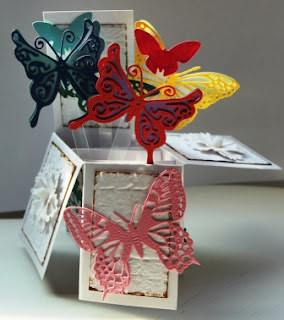 This is called a "card in a box".  It actually folds down flat to fit into an envelope.  When you take it out of the envelope it "pops" out making it a nice surprise for whoever is recieving it.
Posted by Brenda Scowcroft at 17:16 No comments: 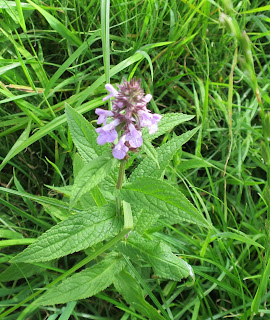 A late start for us today, 0715!!!  We caught up with a hireboat with newbies on, so shared the locks to the top of the Bascote staircase, then we moored up for the rest of the day.  Well, we had done 10 locks. 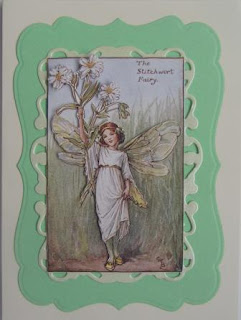 Now for a flower fairy.  This one is the Stitchwort Fairy.  I matted it onto a die-cut doily and then onto another die-cut label.
Posted by Brenda Scowcroft at 16:51 No comments: