I don't know, you miss a few days and it is really difficult to get back into the habit of blogging.  So sorry.  Though it is difficult if I don't have a photo to publish too.  Blogs are boring without pics, don't you think?

Anyway, we got back from Spain early August and missed all the fun on the moorings (yet again)!

There had been an auction for a mooring and the winner arrived, but soon started accusing other moorers of various misdemeanours and then began threatening to mutilate the males and stab one of the females.  Fortunately their contract for the mooring was not signed so they moved off.

The good news is that BBC Dave was the under bidder and he was offered the mooring. 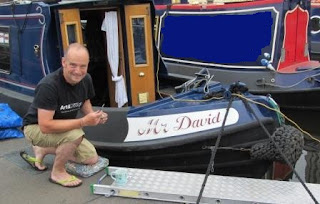 On our big cruise in the Spring we managed to rub off the Mr on the bowflare.  Calum can be seen here painting the white bits 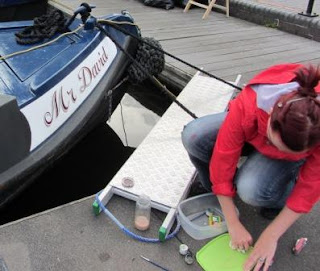 And Ana has just finished the signwriting.

So we are all shipshape again.

Well, almost, but that is another story. 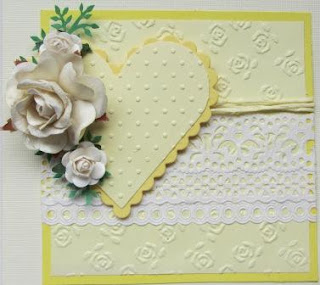 Caroline and Curtis celebrated their second wedding anniversary in July.  This is the card I made.

I Cuttlebugged a square piece of white card and stuck it onto some yellow card.  I wrapped several paper lace strips around and fixed it to the back and also some yellow paper string, fixing that at the back too.

A white Nestability heart was Cuttlebugged, then matted onto a yellow scalloped one and fixed to the side of the panel.  I stuck this panel onto a white, square card blank and then added to roses and leaves.
Posted by Brenda Scowcroft at 19:47 No comments: