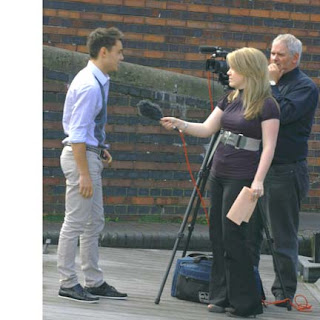 Famous people on the mooring this month No 2 (well, sort of). This time it was Leon (who?) being interviewed by the local ITV station. Apparently he won the X Factor last year.

David was asked not to photograph him by a minder, but as you can see he did.

The security for the forthcoming Conservative Party Conference is gearing up. We noticed on Tuesday that the rubbish bins had disappeared. Now there are fences all around the conference centre and turnstiles and more policemen that you normally see in a year.

I promised a card for the Birmingham City fans after the Aston Villa one last time. Here it is. 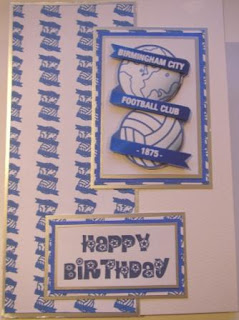 I made a large three-fold card and put silver card on half the front page covered with a backing paper I made up on the computer. I then printed off three copies of the logo which I decoupaged onto white, silver, blue, patterned and more silver card. I printed off the sentiment using the Bend It font again and matted that up the same way. 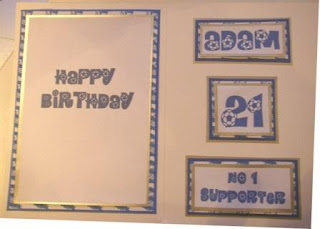 The 1st inside page I made a large panel using the same combinations of card and for the 2nd page I printed off the recipient's name and age and then matted it up again in the same way. 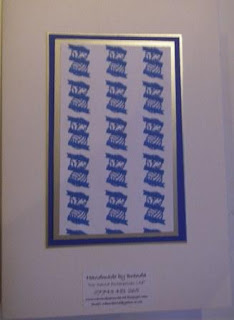 The back page is just a large panel using the backing paper matted onto silver, blue and silver card.

Posted by Brenda Scowcroft at 16:28 No comments: 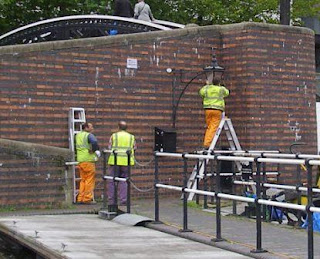 So! How many men does it take to change a light bulb?

We went to the Symphony Hall last night not really expecting there to be any tickets for us to see Nigel Kennedy and his band but when we got there, there they were, along with two tickets to go back stage afterwards. What a star!!

I am not keen on jazz as a genre but he was mind-bogglingly fabulous and we really enjoyed the gig.

He is such a nice chap. He had also invited some homeless people and had sent someone with them to Primark to kit them out beforehand. He even recognised us at the party afterwards!! 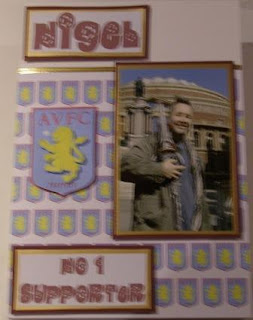 This is the card that started it all off. David found a photo on the Internet and I matted it up onto gold and maroon card. The backing paper I made in Word using a jpg which I just copied and pasted until the page was full. The Aston Villa crest was decoupaged three times and I did the sentiments on the computer using the "Bend it" font which was also matted onto gold and maroon.
Next time you'll get a Birmingham City card - just to show there is no favouritism!
Posted by Brenda Scowcroft at 16:53 No comments:

At last! The weather has been lovely all week.

We took a bus ride to Alwras on Tuesday (the trip by boat was aborted in August). We went to visit the National Memorial Arboretum. It is a memorial to all those in the Armed Services who have lost their lives since the Second World War. There are a few people we knew who have their names cut into the walls so we took this opportunity to pay our respects. 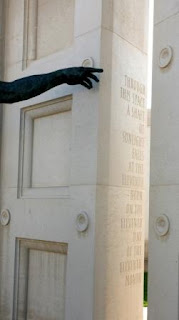 The place was very busy (we were expecting it all to ourselves, like most overseas Commonwealth Graves). The whole area has been done beautifully with masses of young trees (naturally) and small monuments to individual regiments and corps etc and the two main monuments of soldiers inside the two semi-circular walls was very moving.

This picture shows the gap in the wall. A shaft of sunlight shines through on 11 November - a bit like the summer solstis at Stonehenge. 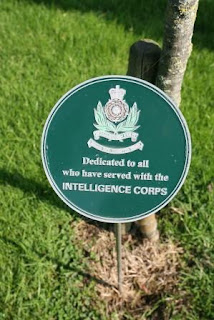 We found the Intelligence Corps plot - just a young tree in the middle of a bog. Just about sums it up really!

After we walked into Alwras (taking our lives in our hands trying to cross a very busy dual carriageway) and had a lovely lunch in the George and Dragon before catching the bus back to Birmingham.

On Friday we were sat on the boat with the front door open when Nigel Kennedy (the violinist) walked past. David spoke to him when he came back and showed him one of my cards with an Aston Villa theme (him being a great Villa fan). I said I would make him one for today so when he went past again we gave it to him. He is a really nice guy and seemed very pleased with his card. Well - I got three kisses and he is getting us tickets for his gig tomorrow night in the Symphony Hall!!!


My first Christmas Card of the year. Though I am in the process of planning our card I have not actually stuck anything down yet. This one is for our friends on Amber Moon. David took the photo of their cans last week when they were here and I made 25 copies. I printed the words "Happy Christmas" onto the cards then stuck the pictures towards the top, covering the edges with curvy edged holographic peel-offs.

David also took a few more pictures and I made these two cards using up the Christmas cards that I messed up in the printer (you know card makers never throw anything away!). The first photograph I matted onto gold and green card. I stuck ribbon across the front and a green panel on the right hand side with 3 amber square jewels stuck on it.

And this one shows the tiller pin (Amber Moon not an Islamic moon.) This one I matted onto gold, orange and green card and just a narrow gold ribbon along the bottom with three more amber glass jewels

I don't know what they will do with them, I suppose thank you cards or something like that.

Posted by Brenda Scowcroft at 17:50 No comments: 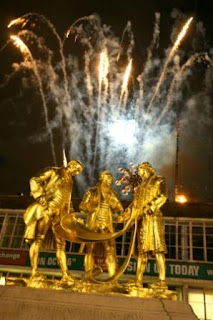 Probably the most cultural week we have ever done.

It started on Tuesday when we visited Walsall (free using our bus passes on the train!) to see the Jacob Epstein Collection. There are some wonderful drawings and paintings from various artists as well as sculptures.

Then on Thursday we saw Caberet in the REP. I love going to the REP Theatre as it is so close to the boat that you can come home to go to the loo in the interval and not have to queue up!

Cabaret was fantastic (and lots of scenes of nudity!). Anything to do with Berlin for us is always interesting (that's where we met 37 years ago!) and I once visited a nightclub there where there were telephones on every table.

Then it was the ArtsFest Weekend with performances going on all over the city. Friday night we were at the Cathedral waiting for the Burne-Jones window to be illuminated (we waited 1/2 an hour in damp clothes (it had been raining again) and nothing happened so we came back home disappointed.

Saturday we were back in Centenary Square to see the CBSO, Birmingham Royal Ballet and Birmingham Opera Company performing various works with a glorious finale of The Ride of the Valkyries" and "Starwars" accompanied by fireworks. And to top it all we were back on the boat before the last notes had hardly finished. Who would want to live anywhere else?

ing moorers. The first one was for Calum. He has an old Springer boat adapting and it has a lift-up roof like some camper vans. For some reason he has covered it in camouflage netting. I told him about the boat in Devizes which is also covered in camouflage and so I made the card using a picture of it.

photograph a couple of times. I then covered the picture in some green netting stuff, fixing it to one side so that it can be removed. It looks a bit like more camouflage and I was well pleased with myself for thinking of it. The sentiment was printed in an army type stencil font and matted onto more camouflage tissue.

The second card is for Hugh and Ivy on their new Liverpool boat which they named after Ivy. It has lovely signwriting with wreaths of ivy on the sides and bow flare. David took a picture and I made two copies, cutting out the ivy swirl and the word from one which I stuck over the other with sticky fixers. I then matted it a couple of times before fixing it over yellow ribbon. Again I made the sentiment on the computer and matted that up too.

I am quite willing to do a card like this for your boat if you send me a picture in jpeg form. They make lovely thank you notelets and will cost you just £2 each plus postage.
Posted by Brenda Scowcroft at 09:52 No comments: 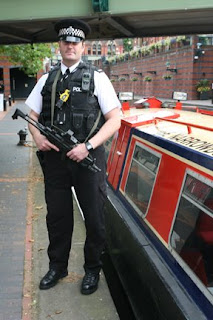 Amber Moon paid a flying visit Sunday night which was a good excuse for a meal out at our local Thai restaurant.

Then we had the Cabinet meeting here at the ICC yesterday - though no-one came this way. The canal was not closed off like they did for the conference in the Spring, we just had the armed police.

Two more boats have moved into the basin, Calum on Mystic Magic and Hugh and Ivy on Ivy. Mystic Magic has had several reincarnations (pic soon) and Ivy is a brand new Liverpool boat. 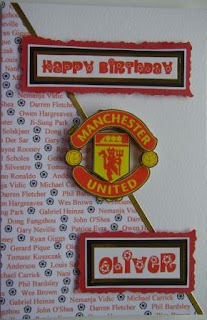 Here's a card for a United fans. I made the backing paper by getting the names of the team from the Internet. I found a football dingbat which I put in between all the names. I cut the backing paper on the diagonal and stuck it down the left hand side of the card, covering the join with a gold peel-off strip. 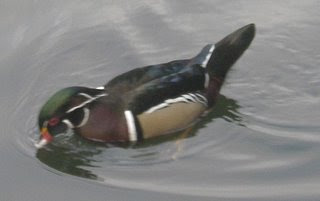 We have just had a few days in Bordeaux, France, and when we arrived back yesterday morning the first thing we saw was the North American Wood Duck who had been missing all Summer(?). He must have gone somewhere warm - so why come back? We have had rain ALL day today - in fact we have had rain almost every day this year.

Sorry I haven't blogged for a bit. I was really busy getting cards made and ready for the IWA Show and then getting ready for the holiday. 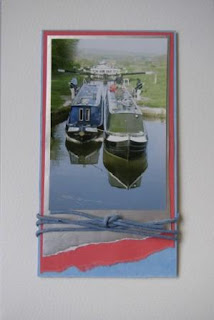 My venture at the IWA Boat Festival was not too successful,
though it was nice to see lots of old faces.

This card is a DL size card. I started with a photograph and matted it onto silver, red and blue card. I tore the silver and red card at an angle and tied some blue cord around the bottom.

I have been adding lots of cards to my shop at ArtyMiss Barter here but there are lots more to go - so please be patient till I get them all up. Please go and have a look.
Posted by Brenda Scowcroft at 17:38 No comments: