I know!  I know!  I promised not to lapse, but the Vodafone dongle thingy has been crap just lately and I get frustrated with waiting for a two bar signal to work in the centre of Birmingham.  We've had better signals in the middle of nowhere. 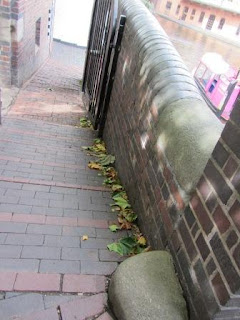 So, the leaves are falling in our pissoir (I know it's an ally way, but the local male population (and some of the girls) disagree and use it as a public convenience).   Autumn is on the way, though the weather has been rather lovely, lots of sunshine - though snow is promised for next week.
Rob has been setting up a shop using Frederick.  He is selling his photographs in card format or mounted onto board (website when I can find the card I have just misplaced).  He has very kindly let me show my cards too - but he is selling far more than me (about 50-1).
This morning, while David and I went to Stourbridge for their open day an American lady visited Frederick and told Rob that she read my blog.  I am so sorry I missed her.  Please come and visit when you are passing again - I don't get that many readers!) 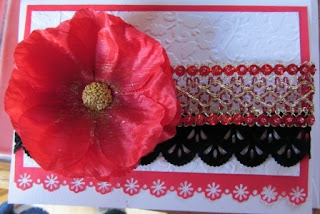 Meanwhile, I have made only two cards in the last month.  This one - a birthday card - and a Christmas card which I'll show next time.

I Cuttlebugged some white card and matted it onto some red which had the bottom edge punched out.  Then I wrapped some black velvet ribbon and then some metallic type ribbon around this panel.  The metallic ribbon was a pain to stick down - even using glue dots didn't seem to work well.

The panel was then stuck down onto a white card blank using lots of double sided tape to keep the ribbon stuck in place.  The red "poppy" was originally a hair decoration from the £1 shop.
Posted by Brenda Scowcroft at 20:00 No comments: