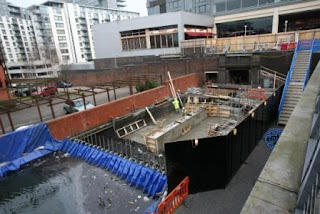 Work goes on around at the Mailbox. Not sure what they are actually doing. Half the arm has been drained and they seem to be building a wall down the middle. Time will tell.

Snow and more snow. Summer had better be bloody hot this year!


The trouble with living with Portobello Road at your back door is that you want to buy things. There was one particular shop about a 1/4 of the way down selling architectural stuff from demolitions etc. Always something interesting to see like stained glass and icons etc. We often popped in to see what was for sale and got to make friends with the owner and his assistant (a resting actor - but that's another story). One day he was showing a beautiful pink altar piece. All William Morris tiles with metal leaves and grapes. David thought we could turn it into a table top for the boat. The owner did not want to sell it though. Wanted it for himself. Was going to put it in his bathroom.

We badgered and badgered, every Saturday and eventually he needed some money to go to see the World Cup in Rome. Result! We bought it before he could change his mind. 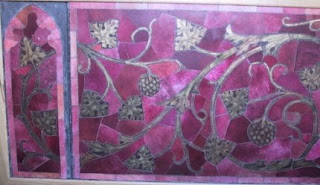 The next problem was to get it back to the flat. The tiles were fixed onto concrete and the concrete onto a large slate. It weighed a ton. We had four American Colonels visiting - they were big and strong. They very kindly took a corner each and walked it back up the hill to the flat. Now we just have to persuade the boat maker to fix in into the boat. 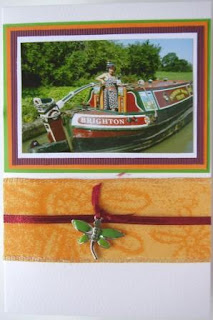 Two cards made with a photograph of nb Brighton on the Oxford Canal.

This one I matted onto maroon, orange and green card. Underneath I stuck an orange patterned ribbon and then wrapped thin maroon ribbon and tied a green dragonfly charm to it. 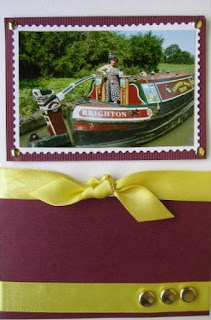 This one I matted onto white card and cut around the edges with tiny scalloped edged scissors before matting it onto maroon card and fixing a gold brad into each corner.

I stuck a piece of maroon paper across the bottom half of the card base and wrapped a knotted gold ribbon around the top join and a strip along the bottom, adding three gold brads along the right hand side of the ribbon (wonkily).

Posted by Brenda Scowcroft at 16:21 No comments: 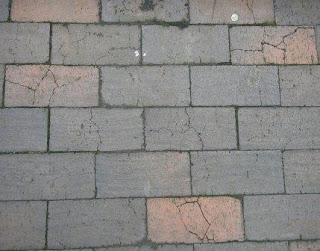 See how the poor bricks on the path have cracked because of all that snow and ice we had in January.

And still it snows!! Though I don't think we had any today, but it is bitterly cold and the rain is icy.

It was David's Birthday yesterday and we had lunch at Edmund's again - his favourite restaurant. Then it was back onto the warm boat and the big arm chair and the telly for the rest of the day.


Continuing our saga on living on this boat.... This is how we planned the boat: 57 1/2 ft long (ordered 57 but got an extra 6"), traditional stern and small front deck. (Thought that as we were in England it would probably rain rather than not, so more inside than out might be useful.) Windows to the bathroom and then portholes for the bathroom and bedroom. Beata 1905 engine and diesel central heating (our only real mistake, but more later).

Going through the front doors and the living space. Ceiling to floor cupboards each side of the door. A 3-4 seater settee along the right side. The galley is "U" shaped with a cupboard in the front facing the doors. Inside the "U" a fridge, washer/drier with gas hob and work surface above, sink and drainer with cupboard underneath and on the back wall, a cupboard on the bottom with a gas cooker above and a small cupboard above that. Between this and the window, another cupboard and a 'hole' underneath. On the opposite wall by the hatch and under the window a small cupboard with drawers.

As we had, in theory, made Caroline homeless, we made a bedroom for her which also housed my sewing machine and the computer. It had a permanent single bed and sliding doors for a bit of privacy. We also had three shelves fitted and two cupboards fitted, one at the top and the bottom ends of the bed (very snug).

The bathroom, we made a walk-through. It gave us a lot more room and enabled us to have a full-size domestic shower with sliding doors. We also went for a pump-out toilet.

The master bedroom is behind and behind that a large walk-in wardrobe with lights, hanging space and shelves.

Finally the bit at the back where the engine is, but that is not my territory! 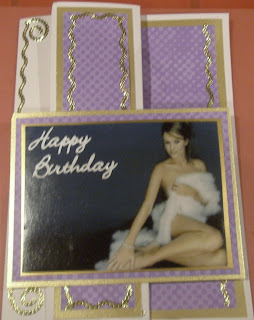 This is David's birthday card from me. He has a "thing" about Amanda Holden so I used a couple of pictures if found on the Internet.

I started with a 5x7" white card and folded the front in half, back on itself. I used some lilac dotty paper and matted a panel onto gold card which I then stuck down on the "back side" of the front of the card. Then I printed off the photograph and matted it onto gold, patterned and more gold card before fixing it to the flap, almost at the bottom.

Finally, I added the peel-off strips. (Should probably have added the ones under the picture before I stuck it down, but didn't think of it at the time.) 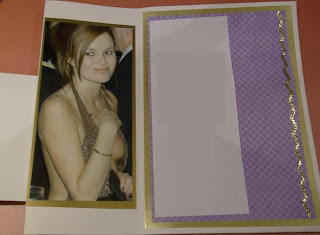 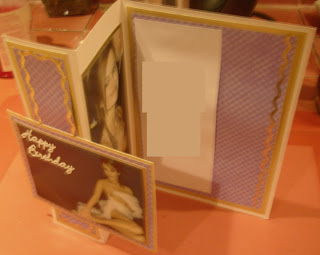 This is what it looks like when it is stood up.
Posted by Brenda Scowcroft at 18:51 2 comments: 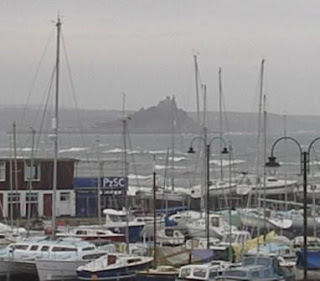 We have just come back from a few days in Penzance in Cornwall. Went down on the National Express coach 2 for 1 and the B&B was 4 nights for the price of 3. Cheapskates you say.

Couldn't believe how green the grass was down there - even saw some daffodils in flower. Though the weather wasn't too good. One night the waves were hitting the promenade and the spray was hitting the window of our bedroom.

Found a great pub with smashing food (The Navy Inn), which we went to twice.

Also hired a car for the 3 days. Last time David drove was at least 3 years ago. So we drove all around the peninsular and up to St Austell and The Eden Project (which we both hated).

One day we took the helicopter to St Mary's on the Scilly Isles. That was a first for me. David was all blaze as he'd been on lots - even got shoved out of one once. The trip back was a bit nerve wracking as there was low cloud, but as the majority of the passengers were fit young men of the Scilly Fire and Rescue Service, I reckoned that at least we would be rescued if necessary.

Back in Birmingham nothing much seemed to have happened. There had been a message from Linda and Kevin on Tranquility who were passing through, so I got in touch and they popped around for a natter before returning their share boat to its base. And then it was batten down the hatches again as it has snowed again today. 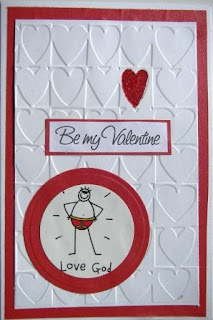 Last Valentine card of the year. This is another one that I made to be sent out to Afghanistan for our troops to buy to send home. Unfortunately, the lady I send them to has moved and the Post Office has just returned the parcel. Too late to send them again.

Anyway, this one has a Cuttlebugged hearts panel in white, matted onto red. One of the hearts I filled in with an embossing pen and embossed it with red embossing powder. The Love God was a removable tattoo that I stuck onto white card and cut it out with a Nestabilities, matting it in red, using the Nestabilities again. Finally, a computer generated sentiment matted onto red card.

Posted by Brenda Scowcroft at 18:42 No comments: