Another lovely day and lots of people, but the awful singing finally got to us at 2pm and we set off for home.  There were out of tune singers, wailing singers, religious singers and nearly all were appalling.

We followed Tony on Trent down the locks and traveled back in glorious, warm sunshine. 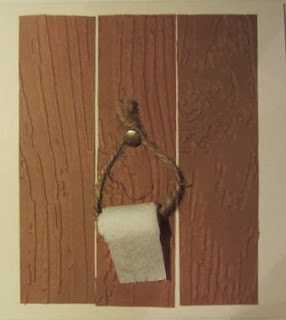 We have an ongoing problem with our bog.  It all started exactly a year ago, while we were at Tipton!  We had a new LeSan HeadMaster toilet fitted a few weeks ago, but it is absolutely useless.  It will flush away only intermittently and even then there is a back flush so it never goes away.  We dare not do anything serious and are  having to use the toilets in the Hyatt Hotel.  There is talk of a warrenty, but the firm don't seem to think it an emergency.  (Southampton Boat Show).  They are getting back to us.

This is the card that I made for Richard the first time we had the problem. 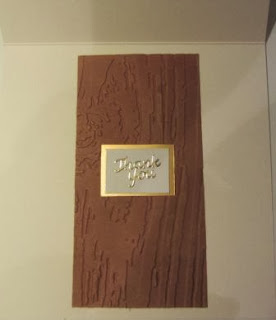 I dry embossed some brown paper with a bark folder and cut it into 4 panels, sticking three on the front to look like planks in the outside loo.  I made a mini toilet roll using a sheet of loo paper cut into strips and wrapping it around a small tube.  String was threaded through the tube and knotted then fixed to the front of the card with a brad.

The fourth panel I stuck inside the card adding a cream matted with gold sentiment.

I thought about making it a "smellie" card, but decided against it.
Posted by Brenda Scowcroft at 20:02 No comments:

What is the world coming to?  We have just passed 8 fishermen and each one similed and spoke!!

Apart from trips to Sherborne Wharf for jobs and pumpouts we have not been anywhere on the boat, so i haven't had much to blog about.

David let me buy a metal box from Steve to put all my card stuff in.  He was fed up of having the boat full of boxes and stuff. Steve makes the most wonderful boxes.  We have two now, and Pete and Peter have one each; so along with Steve's own box for Frederick there 5 on the moorings - each one made specifically for its owners.

We set off for Tipton at 0730 this morning, arriving 3 and bit hours later.  Wayne had left us a mooring on the towpath side so that I could sell cards and there were several other traders there, including the cheese boat which was doing a roaring trade.

As like last year the sun came out and it was warm and sunny. 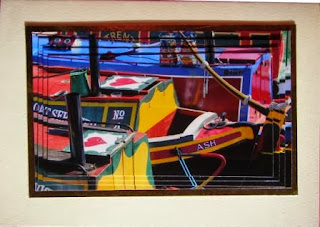 I used 5 photos to make this card, cutting out and using the centres which got smaller and smaller.  I then used sticky fixers to constrsuct a 3D type picture which was matted onto gold card and then onto the white card blank.

I saved the frames a an did an inverted pyramid on another card.
Posted by Brenda Scowcroft at 19:30 No comments: