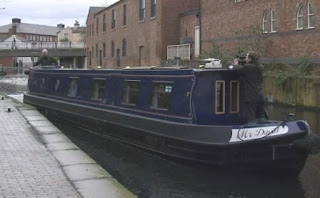 We're going to be on the telly again! Well Mr David is, and possibly us and it's only on BBC West Midlands. It was meant to be on tonight, but got postponed for a paedophile!! So it may be on on Monday.

The pic shows Robin on the bow filming David outside the Malthouse.
Ponytail Pete had his car stolen/removed by the Police the other day. He had some gas bottles in the back ready to be exchanged the next day. The Police said they were investigating the pub as a door was insecure and saw the gas bottles so took the car way for forensics. It is never quiet around here. 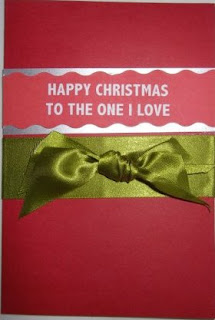 I have finally finished the 500 Christmas Cards for my Hairdressers. There was so much work in them that they to took forever (2 boots, skirt, 4 parcels, 1 ribbon, 2 matted sentiments!!!) When will I learn. They all had to be slightly different of course, but at least I managed to use up lots of scraps of Christmassy paper.
Pictures coming soon
This one started off with a red card. I printed the sentiment on white paper and just coloured in the background (using Word). This was stuck onto a panel of silver card and the green ribbon was fixed underneath and a bow added.

Posted by Brenda Scowcroft at 18:43 No comments: 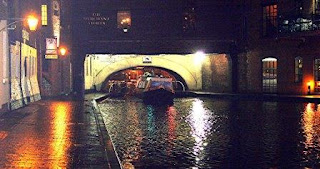 Where does the time go? I have not posted for ages. My only excuse is that I have not got any current pictures of the waterways and I have been busy making 500 Christmas cards for my hairdresser!

We have had several visitors, including old friends that we met while in Cyprus who turned up out of the blue. Great fun, lots of reminiscing and catching up was done.

David has been published in the December edition of Canals and Rivers. This is one of the photographs taken awhile ago as the boat is Europe which was removed and sold/destroyed in the Summer. 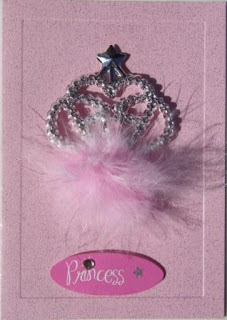 I found some "wands" in the £1 shop - 2 for £1. I broke of the wand bit, just keeping the top and then fixed it to the shiny, sparkly, pink card with glue-dots. The sentiment was then added to the bottom.

One little girl was so impressed with it she actually stole it while my back was turned!!!
Posted by Brenda Scowcroft at 17:03 2 comments: 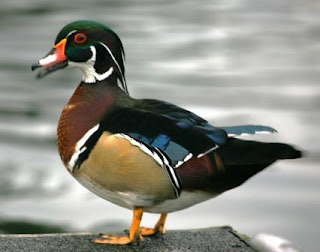 What do you think of our exotic wildlife in the centre of Birmingham? David has just spent 3 days (on and off) trying to get a decent photo. He is very shy and it is difficult to get near him, even so he bosses about the Canada Geese (which can't be a bad thing).

Walking down Harbourne High Street yesterday we got a phone call from West Midlands BBC (the same bloke that filmed us this summer). He wants to know if there is anyone out there who was at the top of a BW Moorings Waiting List, but lost out to the tendering system when it started. If you know anyone will you please get in touch with us so that we can pass on your details.

We now have the electricity back on so have hot water again!!! and I have 6 bags of washing. The bad news is that we now have an oil leak and a coolant leak somewhere in the engine. The boat seems to be falling apart. 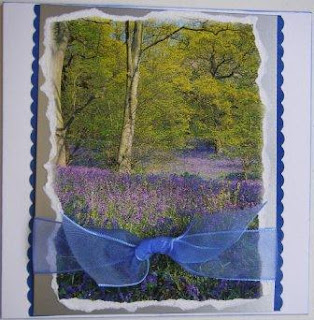 Whilst in Waitrose yesterday there were lots of lovely bulbs for sale and it sort of got me thinking about Spring - and why not? So here is a card made from a photograph of a bluebell wood. I tore around the edge and then mounted it onto silver and blue card, the blue card was scalloped. A blue organza bow was wrapped around and then the card was fixed to the white card blank.

Posted by Brenda Scowcroft at 15:53 No comments: