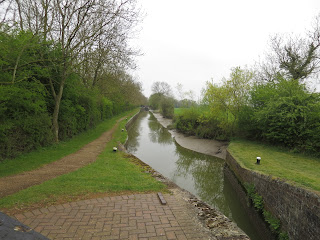 A really early start - 0545!  Noticed someone complaining on Facebook that people go past her boat very early in the morning.  Whoops!  Does she know she is missing the best part of the day?

Everything was going well until we got to the middle of Claydon locks and we were met by a CRT worker.  The pound between locks 20 and 21 was empty.  We had to wait for an hour for the water to be replaced.

Then it was on through Cropredy where we took on water and got rid of the rubbish and it was on to Banbury, stopping off for a pumpout at Sovereign Wharf (they are only open on Fridays, so we were lucky!).

A quick shop in Banbury (I have not been too well for the last couple of days and couldn't manage the town, in fact I never even got it to the front door of the mall!).  The it was on to a piece of piling between two open lift bridges.  And it was still only 1pm!!! 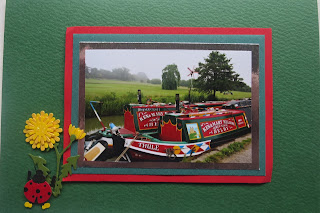 Two pretty boats on a pretty card.  I matted the photo onto silver, blue and red card and fixed it to a green card blank.  Then a topper of dandelions and a ladybird was added.
Posted by Brenda Scowcroft at 13:22