Only slight drizzle when we started out this morning.  By lock 19 they were putting up a net barrier to keep the fish in the side pond.  Apparently the fish are escaping the fishermen by swimming into the canal.  Can't say I blame them.

We saw our first lambs of the season though they were not newborn. 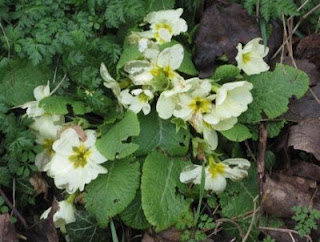 Lock 19 had a paddle that was stuck half open, so we had difficulty filling it and it needed the two of us to force the top gate open.  At least it had stopped raining by then.

We stopped for a rest before starting the Hatton Flight.  Lots of walkers about and saw the first primroses, though they were not completely wild, they had been planted along with some crocuses and daffodils.

By the time we reached Lock 34 we had had enough and moored up for the day.  It's just after 5pm and I am ready for bed.

Two other boats on the move today, again going in the opposite direction to us. 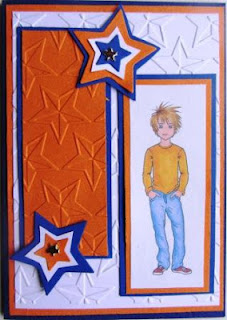 "Mikey" is a digital stamp, when I bought it I received a black and white version and a pre-coloured version.  I cheated and used the pre-coloured one here.

I started with a blue card blank and covered it with orange card, leaving a small border.  Then a white panel, which had been embossed using the Cuttlebug was stuck down on top, leaving another border.  A smaller, embossed, orange panel was cut out and matted onto blue card.  I stuck this panel on the left hand side of the card and then matted Mikey onto orange and blue card and stuck him down on the right had side.  Two die-cut and matted stars were then added for decoration finished off with two star brads.
Posted by Brenda Scowcroft at 17:18