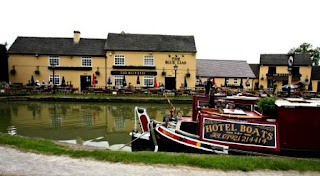 The weather seems to be getting worse. I started off the first lock in a short sleeved top, changed for a sweatshirt at the next one, put on a cardi for the third and ended up with a coat and scarf for the rest of the long climb up to Napton Junction.

At one point there is a long stretch of canal with one side overgrown with tree branches and the other with reeds, so there is a narrow channel down the middle. There was a boat approaching us just before we got to the narrow bit, so David hung back to let the oncoming boat through. When this boat Nogin or Nosum (didn’t get the full name) came up to us the man on the back let out a stream of abuse, effing and blinding and asking why David was “in the f****** way”. Just can’t please some people! And, guess what? When we got to the next lock, the gates were open!
The pounds going up the Long Ichington Locks were all rather low but the one below the Bascot Staircaise locks was very low and I had to flush extra water down when David got stuck in the middle.

Just two more locks and we were at the Blue Lias pub by 0930 so we moored up for the day and had lunch there as David is doing pub reviews for Canals and Rivers. While we were there the hotel boats Snipe and Taurus arrived for a lunch stop. 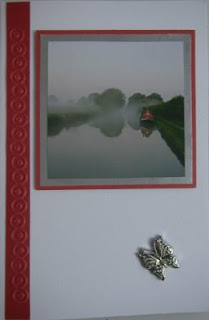 The second of my last session of cardmaking. A picture of a boat in the mist. I picked out the red from the boat in the matting and decoration to help it stand out more.
I used a white card blank and Cuttlebugged a strip of red card to stick along the left hand side of the card. The matted photograph was then placed in the top 1/3rd of the card. Below that I added a silver butterfly that was once fixed to a hair grip.
Posted by Brenda Scowcroft at 08:46