The curse of Farmer's Locks has struck again. David has managed to break his indestructible glasses, he has caught a cold and there has been a cock-up on the BW Stoppages Front.

I have managed to miss a rather important stoppage at Atherstone - several stoppages in fact.

There was a layer of ice on the canal when we woke up this morning. We hung around until 9am when it was melting a bit and set off. After stopping in Fazeley for a newspaper and a few groceries we turned right and traversed the two Glascote locks. Nice to see that the top lock is still taking forever to fill. Both the top paddles would not go down properly either.

There was a nice piece of piling just before Alvecote, opposite a golf course. The sun was shining, we could get the satellite dish to work and David was having a relapse, so we stopped for the day. 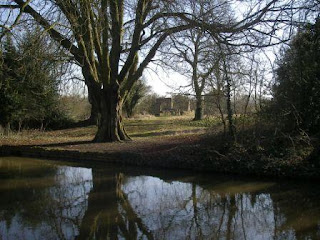 Then I went for a walk up past Alvecote Priory. On the way back I passed a boat with a man sat on the back. Another boat was passing on its way back to the marina there. The man on the boat asked the other boaters if the stoppage was still ongoing. They didn't know, they hadn't been that far.

Silly me! Missed that one. So it's back towards Birmingham yet again. One of these days we'll get away. 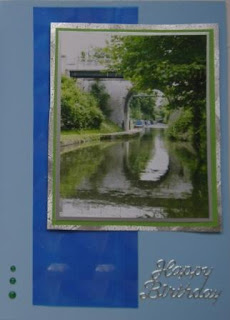 A pretty bridge on the Shroppie matted onto silver, lime green and more silver card.

There is a strip of blue card (from a tissue box!) behind and three blue gems on the bottom left hand side of the blue base card.

The card is finished with a peel-off sentiment. 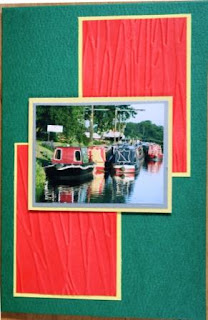 And this one started off with a green base card. I matted two red Cuttlebugged panels onto yellow card and stuck them onto the base card, one towards the top right hand side and the other towards the bottom left hand side.

The photograph was matted onto silver and matching yellow card before being fixed in the centre of the card.
Posted by Brenda Scowcroft at 18:23