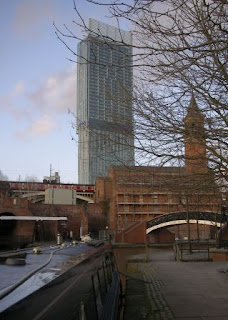 David was up early and we were off at 0600 managing to get here before the rain really set in.

Everything was going well until we got to Waters' Meeting and there was a sign saying that the Barton Swing Bridge would be closed until 4 April. So we are stuck again. If the alternator had not broken we would have been through before the closure. Most people never see this bridge swung open, we seem to catch it every time.

In Birmingham we sit in the boat and look at the Hyatt Hotel. In Manchester it's the new Great Northern Building and the Hilton Hotel.

I forgot to mention that last Sunday a fellow Gas Street moorer, Graham on nb Collingwood went past. He was off to Manchester to survey the bridges. He is now moored at the other end of the basin here. 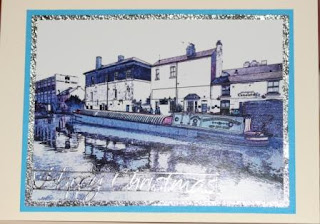 So, to tie it all in here is a Christmas card I made for him last year of Collingwood. David "Photoshopped" the picture and it looks like a faded watercolour painting. I just matted it onto silver and turquoise card and added a peel off sentiment.
Posted by Brenda Scowcroft at 19:16