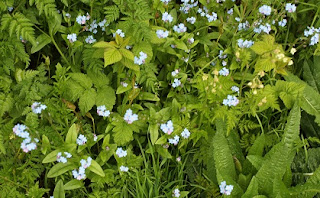 Forget-me-nots on the bank.  Lovely.

We were up at dawn's crack (yet again) and through all the tunnels by 8 o'clock and sharing Preston Brook tunnel with a duck who paddled on before us, quicking furiously.

There was a boat already moored up by Moore Post Office so we used the one spare ring put a pin in for the back rope.  Later this boat moved and we were able to move up and moor on the rings at Moore.

I took the opportunity to catch a bus into Warrington and then another from there into Liverpool.  I wanted to see the Chinese Terracotta Army but would have had to have waited until 3.30 pm before I could get in.  So, after a wander around the shops I caught the train back to Warrington and then the bus back to Moore.  It is such a handy service a bus goes past the mooring every 1/2 hour. 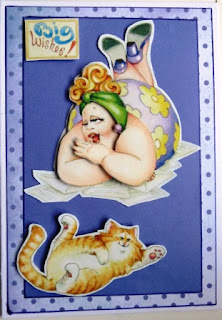 One of my Big Wishes card (I think I made about 4).  A jolly lady with her jolly ginger cat.  I cut them out and stuck them onto a blue background with dimensional stickers.  The edge of the card has been edged with dark blue ink, as has the blue dotty paper behind it.  The whole panel was then added to the white card blank.
Posted by Brenda Scowcroft at 18:28