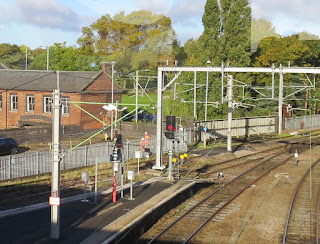 It doesn't really show in the picture, but you can just see Mr David on the canal as seen from the bridge at Wolverhampton Rail Station.  It's the little blue dot on the left of the railway signal.

We were on our way to Birmingham for David to get his tooth seen to.

Back from Birmingham at 1130, we set off and got to Spon Lane Junction at 4.15 and decided to make it a day, so we moored up on the off side of the lock landing. 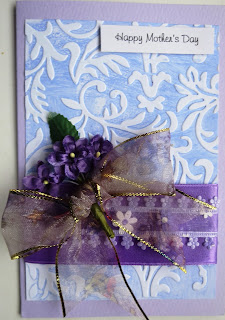 Now for a Mother's Day Card.  Now should it be Mother's or Mothers'?

I began with a lilac card base and then embossed a piece of white card where the embossing folder had blue ink spread over one side so that it partially inked the white card.  This then had some lilac ribbon and some fancy ribbon wound around the card and stuck it onto the card base.  Then I added a bunch of silk violets, wrapped in a gauzy ribbon and a computer generated sentiment.
Posted by Brenda Scowcroft at 15:31