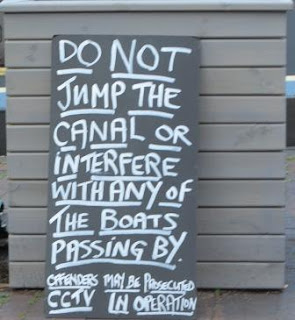 The first Saturday that we had sunshine and the stag parties were jumping the lock and swarming over passing boats as they negotiated the narrows.  I think the police must have had a word with the owner of the Canalside Cafe because several signs have appeared (though only one seems to remain at the moment).

We have actually taken the boat out of the basin (apart from pump outs).  We visited Sherborne Wharf to get the windows finished and sealed off and then set off down the Worcester and Birmingham.

Hopwood is about the first decent moorings a good run from Birmingham so we moored up by the bridge.

Three fellow moorers passed on their way to Alvechurch and we arranged to meet them tomorrow.

It was so nice to be out.  I have missed so much of Spring this year.  We saw ducklings and moorhen chicks, lots of butterflies and dragonflies, roses, foxgloves, meadow-sweet and the last of the yellow flags.  And best of all, the sun shone all day! 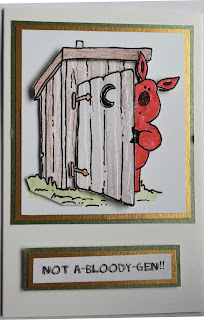 Poor Richard at Sherborne Wharf had the joyous job of fixing our toilet.  I managed to drop a wet wipe down (though I have no recollection of doing so!)  Consequently the macerator came to a grinding halt.

This is the third time that he has had to play with our outpourings.  I made this card as a small thank you.

I printed off the stamp about 4 times, coloured them in with pencils and markers, then decoupaged them using sticky fixers.  I was really proud of myself as I managed to get the pig to peek out of the door.  I did this by sticking the hinge end of the door directly to the shed with double sided tape, cut a flap at the side of the pig and stuck him behind the door with sticky fixers.

The sentiment was done on the computer and I matted both onto gold and green pearl card.

This is a side view showing how the pig peeks out of the door.

Posted by Brenda Scowcroft at 19:08