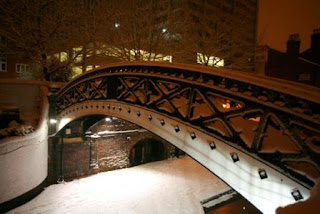 David has been having fun taking photographs out in the snow. This is the bridge over the Worcester Bar Lock. Personally, I've seen enough snow for this year - it can thaw now.

Not much happening, what with being iced in so I thought you might like to read how we got to be here on this boat, surrounded by ice and snow.

When David left the Army after 35 years (and 27 years of married quarters) we had no idea where we wanted to live. We never had a yearning for a semi on an estate. An oast house? awindmill? aconverted chapel? (probably all too expensive.) Well then, a double decker bus? a railway carriage? or a boat? Always loved boats. Used to buy canal magazines if going on a journey. Let's look into that.

I can't remember when, exactly, we came upon the idea of actually living aboard a narrowboat. I know we were going to hire one on the Llangollen when we were living just outside Shrewsbury about 28 years ago. But David got a posting and we were in Budapest before we could do it.

While we were in Ashford, Kent about three years later we visited the IWA boat show at Brentford and went on all the boats. I fell in love with a Warble built boat - David said it was far too expensive, and anyway we still had years to do in the Army.

Then we got posted again. First to Edinburgh, then Germany and then Cyprus. It was another 8 years before we were back in the UK. 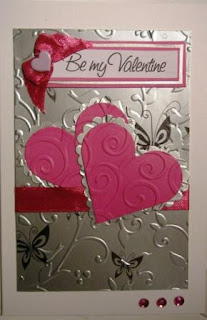 I have just made 19 Valentine cards to be sent out to Afghanistan for the troops to send back to their loved ones. Just one more to go to make the 20.

I made then all just using Cuttlebug embossing folders and some Nestabilities dies, plus ribbons, gems and brads etc.

Everyone card different. This one started out as a tissue box. I cut it down and embossed it with "Birds and Swirls; wrapped a pink ribbon around it and used two matted and embossed pink hearts. I typed out the sentiment on the computer and matted it up on pink and silver card and stuck it down. Finally I made a bow with the bit of ribbon that was left over and fixed it with a heart shaped brad and three pink gems.

Posted by Brenda Scowcroft at 21:22

Beautiful Valentines card Brenda, I should be making some now Christmas is out of the way.
Happy New Year to you and David.
We are due on Tranquility 31 January but weather may change those plans.