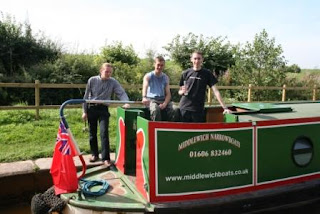 There were 30 boats at Westport Lake when we left for Harecastle Tunnel early this morning.
The plan was to take on water while we were waiting for the tunnel to open but when we got there, there were already 4 boats in front and only 8 can go through at a time. So we moored up to wait for the opening time of 8am.
Of course, they set off from the other end at 8am. It doesn't matter which way we go, they always start off at the other end! Still, we were through by 0930. Fortunately, 3 of the boats went up the Macclesfield Canal, so we all set to on the double single locks, then the single lock, and stopped at Red Bull for a pump out, water and rubbish disposal stop.
When we set off there was a Middlewich hire boat in front with 6 young men crewing. They were very helpful and set the other locks for us and stayed behind to help with gates and paddles.
We left them just before Church Locks where they were taking on fortification for the rest of the locks. They have to be in Middlewich for handover this evening!
I must say, it has been surprisingly quiet here this afternoon. After all those boats before the tunnel we thought it would continue to be busy. They must have all gone up the Macclesfield. 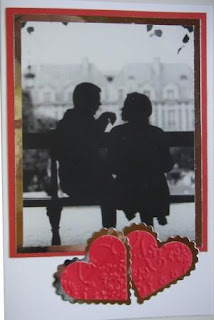 I started off this card with a picture from the side of a tissue box. I matted it onto gold mirror card and then red card. The two hearts were cut in red with a Nestibillities die, likewise the gold, scalloped hearts and stuck them to the bottom of the panel. The red hearts had been Cuttlebugged again.
Posted by Brenda Scowcroft at 18:39