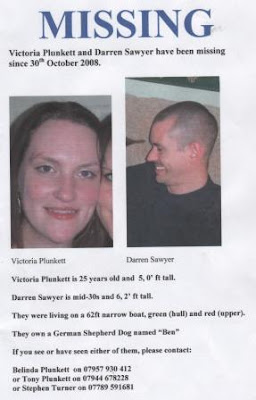 Last night we had a visitor who gave us this poster. He is looking for a couple who live on a narrowboat. He describes the boat as 62ft long with a green hull and red upper - but no name of the boat.

They have not heard from the couple since October and are worried about them.

Is there anyone out there on the Towpath Telegraph who has seen them recently?


We are iced in again this morning and it is foggy too. We had a slight flurry of snow around 10am. Not a good omen for the fireworks tonight!

All excitement 10 minutes ago. On checking my emails I discovered that I had sold my first card on the MisiMe website. Hope this bodes well for the New Year. 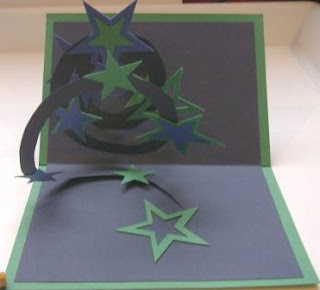 I had to make 4 cards for Baldish from our Doctor's surgery. She always sends New Year cards.

This time I made some lovely spiral pop-up cards. The idea came from Splitcoast Stampers here. I cut out the stars on my trusty CraftRobo and using different colour schemes roughly made the same card in 4 different ways.

I liked them so much that I made two more similar ones for Tom next door when I persuaded him that he needed New Years cards as well. 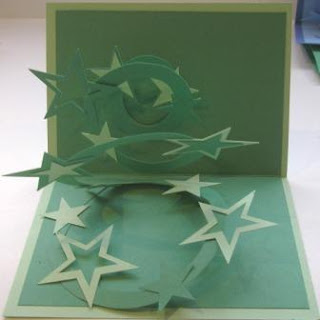 Posted by Brenda Scowcroft at 11:36 No comments: 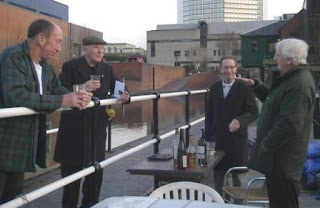 Hope you all hade a good time during the holidays and still have some money left!.

Christmas on the Moorings - it was a very quiet one. Those that had stayed behind on their boats for the day gathered for drinks before lunch and then we all went off to visit varous relations for the rest of the day. It must have been one of the few days that there was not actually anyone on any of the boats for several hours. 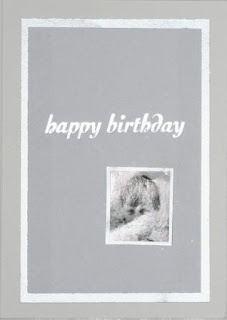 Just before Christmas we visited Bolton for one of David's brother's 70th birthday. He treated all his siblings and their spouses to lunch up on the moors. 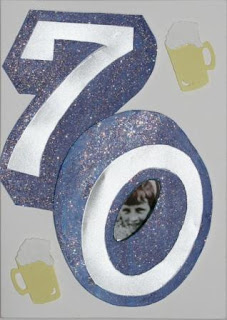 I cut out the 70 on the CraftRobo twice. Once in blue and the smaller in silver.

I added a purpley-blue glitter to the blue card and added the numbers to the white base card with sticky fixers. A hole was cut through the base card and two die-cut beer mugs were added for decoration.

Inside I mounted some blue paper onto silver card and fixed it to the inside of the card. Then I matted an old photograph of Arthur onto silver card and stuck it on so that it peeked through the hole in the card when it was shut. The final touch was a rub-on "happy birthday".
Posted by Brenda Scowcroft at 18:09 No comments: 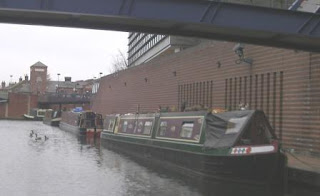 A quick trip around to Sherborne Wharf for a pumpout before they close down until well into the New Year. And surprise! surprise! They may have moved around, but most of the boats are still there from last time. Not bad for a 24 hour mooring!

Our moorers' Christmas Party was very pleasant. Ivy and Hugh managed to get everyone on board their boat and provided lots of lovely nibbles and drinks. We all thank them for their hospitality. 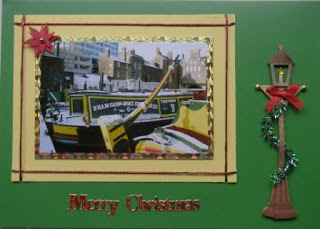 And here is a Christmas Card from Gas Street Basin. Boats in the snow, matted and with string wrapped around plus a bought topper lamp post and poinsettia flower.

Thanks for taking the time to read my blog - hope you enjoyed reading it as much as I have enjoyed writing it.
So Happy Christmas to everyone and here's hoping we all have a great 2009!
Posted by Brenda Scowcroft at 14:42 No comments: 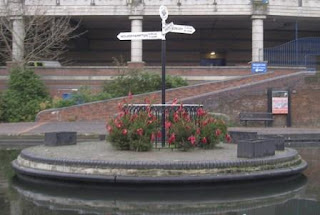 Christmas trees around the signpost on the island at Old Turn on the BCN.

It's the Worcester Bar Moorers' Christmas Party tonight. Who is going to fall in tonight?

We are starting off on Ivy and going on from there - who knows where? 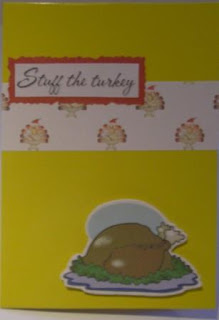 And now - a sentiment that is close to my heart. I am not that keen on turkey and can go without the "Christmas Dinner" without salivating. Give me a steak, or pheasant, or goose - or anything else really; you can also keep the stuffing, chipolatas, sprouts etc, etc.

The inside of this card has the answer - "Eat Chocolate!" and has a large tin foil covered chocolate coin stuck inside. Every card should have some chocolate inside it as far as I am concerned.

I got the turkey from the Internet, the backing paper and sentiments were printed from the computer and the chocolate coin came from M&S.
Posted by Brenda Scowcroft at 17:15 No comments:

Just some of the Boats which seem to be wintering in Birmingham again this year.
We managed the pumpout without it raining (must be a first this year) and Keith came to check out the battery system as it was sill not working properly. Lots of money wasted when we got it "sorted" earlier this year. We now have to get the water pump sorted out yet again! And a leak through one of the windows which we discovered after all the rain on Friday night and Saturday.
The Christmas shopping has all been done, the cards have all been sent and we only have to get the food in - so that's all sorted. A good thing really as it rained all day yesterday and it has been dull all day today and I have only just got off the boat and onto the pontoon twice in two days. 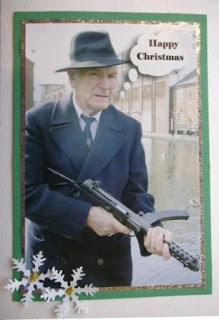 I have been busy though! Pete wanted 20 Christmas cards made from his photograph that David took earlier this year. It gave David something to do, learning how to put a speech bubble on a photograph using Photoshop. I matted the photos onto silver card and then onto coloured card before fixing them to the white card blank. I then added my "this year's trademark", punched out snowflakes with glittery centres, and that was it. Pete liked them so much he ordered another 20!
Then Mike wanted a Christmas card of Gas Street Basin, but you'll have to wait until next time for those.

Posted by Brenda Scowcroft at 15:59 No comments:

Holy seagulls - well they seem to be walking on water!

They are actually standing on a very thin layer of ice just under the water and waiting to be fed by Pete.


The ice has gone again, though we were iced in for almost 2 days. The main canal was free of ice and there have been a few boats moving about. It will rain, hail and sleet tomorrow though - we have to go for a pumpout. 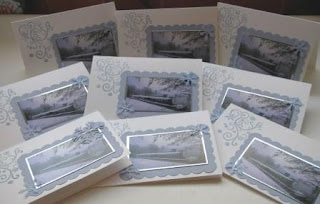 More cards of boats in the snow. This time it is Mr David in the snow at Shepperton Lock on the Thames last April and is our family Christmas card this year.

I stamped the swirly snowflakes strait onto the white card using a light blue ink. The photograph was matted onto silver card and then onto a light blue card before fixing it to the card. Finally I added a couple of snowflakes with glitter centres. 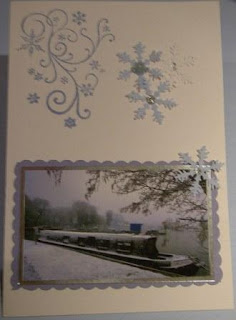 I made most of the cards in a landscape style but managed to get one wrong - so did it in portrait and added an extra couple of snowflakes. Think I got away with it. 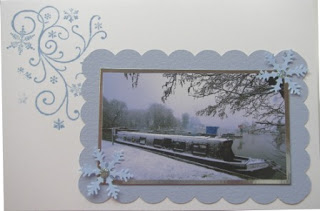 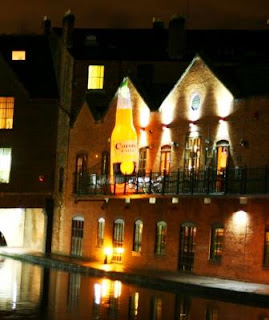 We don't go for Christmas trees here in Gas Street - only stonking great bottles of beer!.

Lauren fell off her boat early this morning. She and Pete were returning from her office do and she slipped while walking down the gunnel (in party dress and shoes). David brought her onto our boat and we got her showered and cleaned up while Pete got her some dry clothes. She seems OK but has a few scratches and bruises.

No-one has seen the pair of them today so I suppose they are a bit embarrassed.

I have made this Christmas card of Granny Button. The original photograph was taken by and published on John Bean's blog Narrowboat Alacrity

I made four copies of the photograph and then cut away pieces from each one to bring the picture into 3D. I used sticky fixers to stick the pieces down and then matted it onto silver mirror card. I had some lovely light blue organdy type ribbon with silver snowflakes on which I fixed down the left hand side of the blue card and added three shiny snowflakes to the right hand side of the picture, adding some glitter. Finally I added the Seasons Greetings peel-off. Hope he likes it. 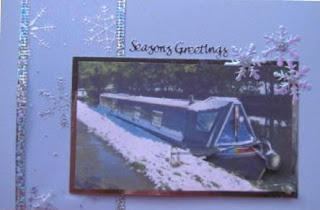 Here is a view from the side showing how the picture stands out. Posted by Brenda Scowcroft at 18:24 No comments:

Here is the rest of yesterday's post. For some reason I could not upload the pictures.

First of all, thanks to Andrew for his comment on how to upload a screen shot. Secondly Grey Nomad asked about the whereabouts of Europe, which I can't answer as I only know that BW took it away to their depot at Icknield Port Loop. The boat was going to be inspected and either put out to auction or destroyed. Having seen the boat it has probably gone to the great scrap yard in the sky by now.

Now for the card bit. Here are some of the 500 cards I made for my hairdresser. He is threatening that he needs another 200!! I got the idea from a free booklet from one of the card magazines around. I traced the boots, mitts and skirt so that they could be cut out on my CraftRobo and bought myself a Xyron machine to put double sided glue onto the back of the black card before I cut them out - that made them easy to stick onto the card and were not all loose in a box.

I used up all my scraps to cut out the 4 parcels, added them to the card and stuck on a bow at the top. Some of them had added peel-off "ribbons" and some had silver or gold "string" drawn with a gel pen. 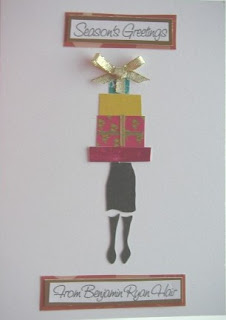 The sentiments were printed onto white paper and them matted onto gold card and Christmas patterned paper before added to the cards.

Easy - NOT! They took forever to make as every card was different.

Posted by Brenda Scowcroft at 12:05 No comments: 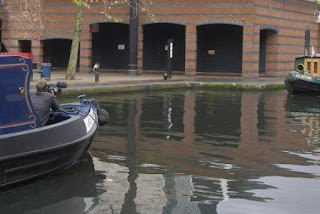 Here is the link for David's second TV appearance this year

Andy Denny on Granny Buttons has beaten me to blog it though and managed a screen shot which I have not mastered yet.
Posted by Brenda Scowcroft at 13:11 1 comment: