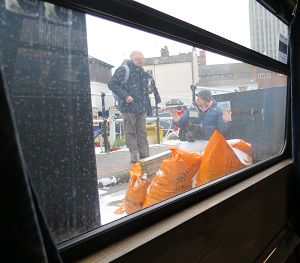 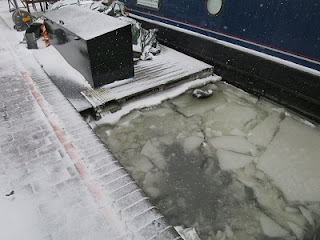 Living in Gas Street Basin you never know what is going to happen next.   Today was one of those days.

A tap on the window, a TV crew want to interview someone about living on a boat in this weather.  David said, "On one condition.!  It had to be done indoors.  But they wanted to film him filling the coal scuttle too.

Soon after that a neighbour asked if someone had fallen in the canal by the boat.  We had heard nothing apart from a girl shouting profanities.  When we went out a bit later we noticed the hole in the ice.  The safety rail has also ended up in the canal as the tyre fender tied to it is floating on the ice.  We followed the wet footprints out past the Canal House and into the car park, so at least he is not still there. 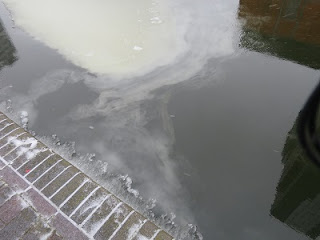 The East wind has kept some of the ice off the canal, for two days and nights the wavelets have been washing against the hull and it sounds like a tap running constantly.  It eventually blew the loose ice down against the hull and then we got grinding and bumping noises as it scraped past the boat.

The formation of the ice here looks more like some sort of pollution.

It is now snowing a blizzard, good job we bought 30 bags of coal a couple of weeks ago. To, getting ready for Mother's Day.  A cute Flower Fairy, matted onto a gold oval and white and yellow daisies, leaves and ribbon to decorate.
Posted by Brenda Scowcroft at 16:48 No comments: