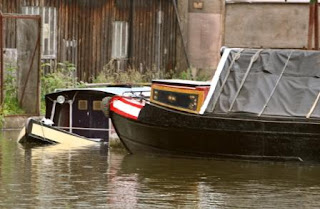 Oops!!  Forgot to publish this one yesterday.  Didn't make it very far from the dry dock at Tardebigge. 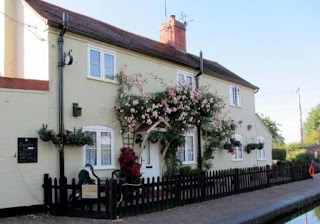 After I published yesterday we got a knock on the boat and Katheryn and John from Golden Cross was there, they were just coming down the locks, so I grabbed a windlass and helped her with the next three locks.  They were followed closely by Tony on Trent 6.  No sooner had they gone past that Graham came by on Collingwood with a group of schoolchildren.  What are the odds of three boats from Gas Street/Sherborne Wharf travelling in convoy quite independently?

We left again at 0515.  Lovely warm sunshine.  The Astwood  lock cottage looking beautiful and well kept.  BW should have sold all the cottages with a caveat to keep them nice and pretty. 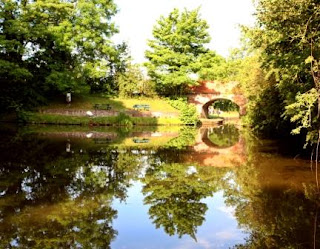 We reached the junction at Hanbury at 0800 and there was nowhere to moor up, so we were cheeky and untied the chain across the entrance to the Droitwich Juncton Canal and moored up just on the other side.

The BW workers arrived about 1010 (supposed to be 0930) and also one man specifically to look after the family of grey wagtails that had made a nest just below the waterline of the pound (when the pound is full).

We were the second boat down that day.  The canal was very pretty, oxeye daisies all along the banks, the new staircase (which was a surprise) and then the low tunnel under the M5. 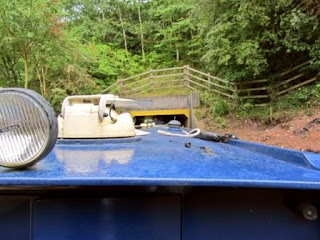 We had about 3" to spare.  Pretty scary.  Then the lock down into the River Salwarpe and then a sharpish left turn up to the Barge Canal.  The canal now goes through a lovely park area with three swing bridges.

There were lots of boats here already and we were moored up abreast to Cousin Bob.  There is just about room for boats to get past.

I think we around around mid-day, but there were so many people around that we knew and got chatting to that I forgot to check the time. 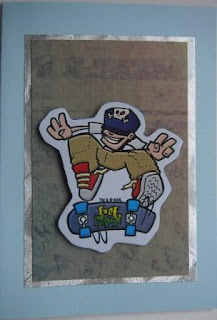 I found some grungy brown, stripy paper which I matted onto silver card and then onto a blue card blank.

The skateboarder, I think, started out as a sticker which I stuck onto some card and then cut out, fixing it to the card with sticky fixers.
Posted by Brenda Scowcroft at 19:28 No comments:

Between Locks 25 and 26 Stoke Locks, Worcester and Birmingham Canal 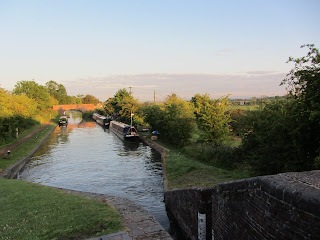 The view from Tardebigge top lock at 0530 this morning.

It was a lovely, sunny, warm morning and we set off with all the locks against us (of course!).  The smell of the honeysuckle and meadowsweet was heavenly and only the top gate paddles were heavy.

We met our only boat on the flight with about 10 locks to go.  The was an elderly gentleman on the back of the boat, who sat there the whole time that I helped lock the boat up.  When we got to the top, he said, "There, the lock's all set for you."  I knew it was, I'd b***** done half of it myself!  You have to smile.

We stopped opposite the Queen's Head at 0945 and had a rest and then a disappointing lunch in the pub.  Meanwhile the weather turned and it began to rain and got cold again.

As we were about to leave the pub, we noticed a couple of boats passing which had just come up the locks, so we set off  (in the drizzle) and did two locks until we saw the bit of piling just before lock 24 and here we stayed. 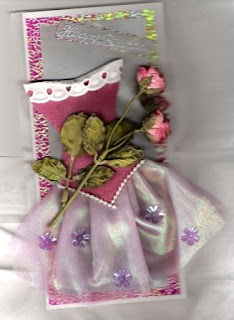 I made lots of these cards when I first started making them seriously.  I had a template for the bodice and cut this one out in thick, red handmade paper.  I added some broiderie anglaise around the top and some pearl strings along the bottom edge.

The skirt was made with a circle of lilac gauze which is folded into quarters and the top bit then gathered with some thread and stuck down at the back of the bodice.

The card blank is DL and white, and I covered the front with some torn holographic paper and then a panel of silver card.  The dress was stuck down with glue dots, some flower sequins were stuck onto the skirt and a branch of roses stuck across the front of the dress.

A peel-off Happy Birthday was stuck onto some silver card and added to the top right hand corner at a slight angle.


I really must make some more of these and see how much my techniques have changed.
Posted by Brenda Scowcroft at 16:15 No comments: 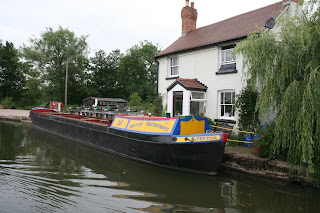 One of the two working boats that are usually moored by the Lower Bittell reservoir.  Just past it there are permanent moorings with lovely views both ways.  What it really needs is some visitor moorings too.

We set off at 0715, passing Beau (who is going to use our mooring while we are away) and had no trouble until we got to Wast Hill Tunnel.  We could see a light as we approached, so David waited for the boat to come through and off we set.  We could see several lights coming towards us, but as the tunnel is almost 1 1/2 miles long we couldn't wait.  We met the first hire boat and they panicked, the boat swung across the canal and we hit it!  The second boat stopped dead and we managed not to hit that one.  Then there were two more which we also managed not to hit.  We saw more boats in the tunnel than we saw on the move all the rest of the day.

We arrived at Tardebigge at 1130 and as it was so cold (it had been sweltering yesterday) we decided to stop above the top lock and not go onto the moorings below.

Late afternoon and the sun came out.  I went to bed at 9.30 with a glorious sunset over the vale towards Droitwich and the Malvern Hills 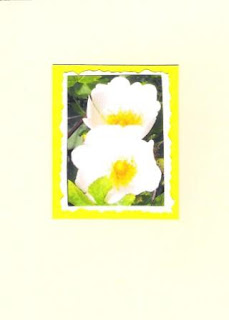 Three cards using the same photograph of white, wild roses.  I thought of this card because there are still some wild roses about today.

This one I matted onto white card, cut the edges with deckle edged scissors and then matted it onto yellow card and then onto a white card blank.  Simple 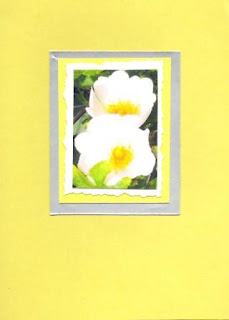 This one was matted onto yellow card and then silver card before being fixed to a yellow card blank.  Simple again! 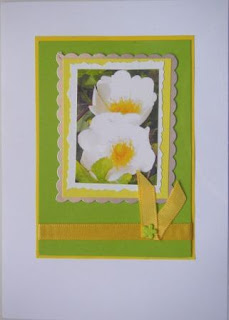 Then on this one the photograph was matted onto yellow card and then silver card with the edges scalloped.  Then it was matted again onto green card and yellow card.

The whole panel was then stuck down onto a white card blank.

Not quite so simple.
Posted by Brenda Scowcroft at 15:38 No comments: 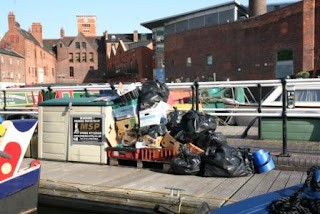 Today we booked to join the flotilla of boats going up/down the Thames next June for the Queen's Jubilee.  There's brave.

We also booked for the opening weekend of the Droitwich Canals and set off tomorrow.  So it's Tardebigge twice ugh!. 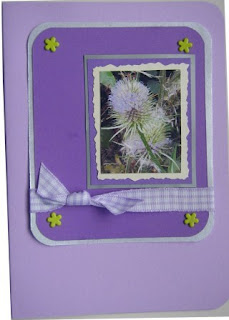 Looking forward to going out on the boat again.  This card was made from a photograph of a couple to teasels.  I matted it onto white card and cut the edges with deckle edged scissors (you can tell how old the card is, I hardly ever use those scissors now).  Then it was matted onto some lilac card and then onto silver card. 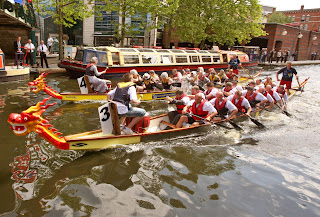 Today it was Lionboat races.  Boom, boom, boom all day.  Well, until someone collapsed and there was a pause while she was seen to by the paramedics.

Poor old Albert was on duty for BW, having to ask boats to stop while the races were one.  One or two black cats were a bit shirty and shouted at him, refusing to stop. 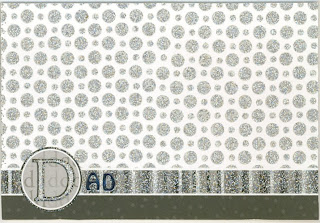 A card for Fathers' Day tomorrow.  The front of the card was covered in a black and white patterned piece of card, it had lots of glitter over it and the "D" was also part of the design.  I added the "A" and "D" to make the word DAD with peel-offs.
Posted by Brenda Scowcroft at 15:21 No comments: 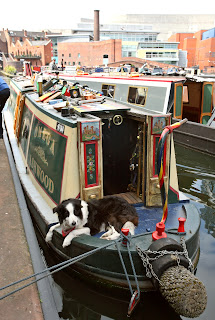 Wayne's dog.  Forgot the name already.  He is a rescued collie and Wayne sells books and stuff for a couple of Collie charities.  David was interviewing Wayne for Canals, Rivers and Boats - the dog wasn't interested at all. 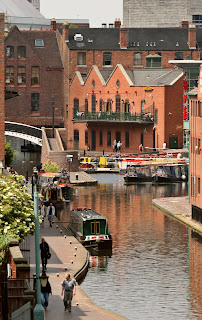 Then we walked on up onto the 3rd floor of the Mailbox and took this photo of Gas Street.  Just can't see Mr David on its moorings from here though. 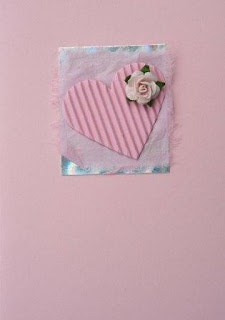 Simple, pretty and effective.  ...Well I think so.
Posted by Brenda Scowcroft at 12:00 No comments: