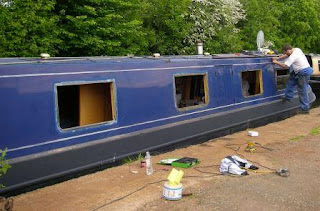 Mr David without the windows. The work is going on well this side is now finished and the windows are back in situ and the other side is being worked on now.

I washed all the curtains and the linings were so old and worn that they have disintegrated in several places - more work. Then the fag of sewing all the buttons back on. Why, oh why did I chose such a complicated design? They do look pretty though.

So a trip into Solihull on several buses (I got on one going the wrong way and got lost) and into John Lewis to try and buy some more lining, but they don't sell the blue stuff there - so I might need a trip to London. Any excuse. Now a birthday card for Frank, who was 14. I stamped the figure and accouterments (a GameBoy, CD player, skateboard and can of pop) onto watercolour paper and then coloured them with watercolours. Then I cut them out. I made a panel with distressed dotty paper matting it onto red and gold paper and another, smaller, one with just the red and gold paper. I then stuck them to a white card and stuck on the figure and stuff with sticky fixers. I then stamped the greeting, name and age.
Posted by Brenda Scowcroft at 18:26 No comments: 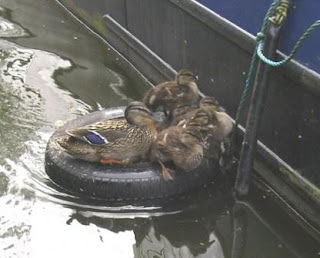 We got back to the moorings last Sunday and discovered strangers moored up there. They said they had been given permission from someone called Sue. As we don't have anyone on the moorings called Sue, we were a bit perplexed.

Just managed to just catch these 5 ducklings and Mum as we sailed past Lyons Boatyard, seconds later they were all in the water. 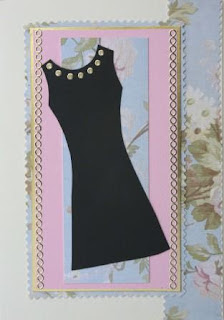 I made this card using a dress template which I cut out in black card and added some tiny crystals to the neckline. I then mounted it onto some pretty blue floral paper, then onto pink card which I added some peel-off borders. I then mounted it onto some more of the blue flowery paper which I cut with some fancy scissors. I also added a strip of the flowery paper to the right hand side of the card (also using the scissors). The "topper" was then added to the card.
Posted by Brenda Scowcroft at 18:27 No comments:

We've done lots and lots of locks since I last blogged, which is the only excuse I'm giving for not having done it every day.

We stopped for a quick shop in Banbury and then it was on to the top of Claydon locks for the night.
(15 locks)

The next day I got a bit of a lie in while David steered the boat through all the twists and turns around Wormleighton and then it was down the Napton Flight. The weather was warming up 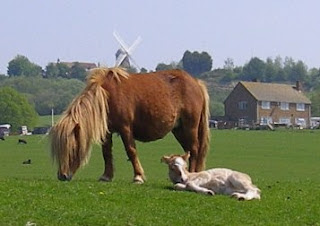 nicely so it was very pleasant. There were a few boats about but not one in every lock which happened last time we did them..

The spring flowers are really beginning to bloom, lots of bluebells, cowslips, buttercups and we saw several duckings and one set of cygnets


Then it was on to the Grand Union and an 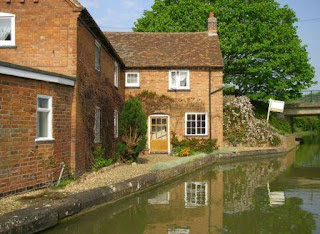 Another of my favourite canalside cottages - and this one is for sale! It has been "done up" quite a bit since we first used to sail past it.

The trip down the Stockton locks was uneventful, then it was on down through the Bascote Staircase and on to Radford. At the bottom lock a BW man was checking the lock and offered to take my rubbish (which I was carrying from the boat) to the skip for me. Now there's helpful!!! 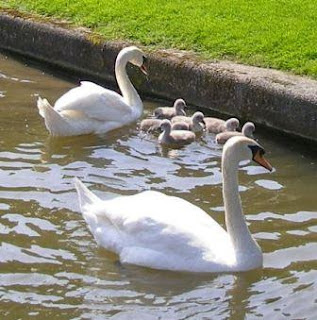 We stopped off at Tesco in Warwick to get lots of drink as it was really hot and sunny. We saw one duck with 15 ducklings and this brood of 7 cygnets who were only just out of the nest.

Then we moored up after the Cape locks to be ready for the biggie tomorrow.
(21 locks).

I forgot to re-charge my camera so I've no pictures for today.

We began the Hatton flight at 0615 this morning and arrived at the top at 0915 - which must be a record. Most of the locks were for us and we met one boat coming down. I got soaked as the light shower turned into a heavy shower. Then it was through the Shrewley Tunnel (where David got soaked, as usual) and we are resting here at Turner's Green.
(21 locks) 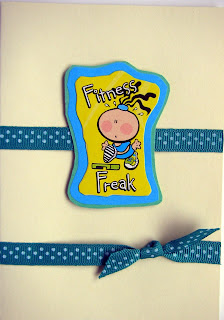 And now for something completely different. Two cards.


This Babe one was made from a sticker which I mounted onto blue card. I used double-sided tape to stick some blue polka-dot ribbon across the middle and bottom half of the white base card and tied a knot in the bottom one (I hadn't used the tape on the end bits!). The Babe was suck down with sticky fixers. 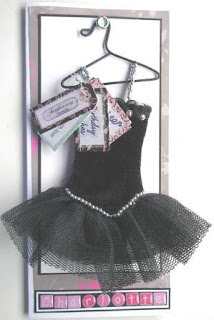 I think it is safe enough to show this one now, as the birthday is over. The dress was actually a Christmas tree decoration. I managed to get a couple in the sales. The bodice is velvet and it has chain straps and pearl decorations. I mounted the dress onto white, black and a pink/grey/white patterned paper and then onto the DL base card. I used a brad to hold the coat-hangar and some double sided tape on the back of the bodice. I then used some small tags and stuck messages on them like "Happy Birthday" etc and used a sticker alphabet to spell out the name on the bottom. 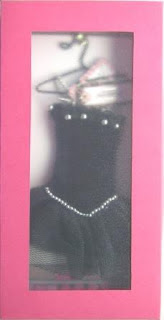 Of course I had to make a box for the card to fit into so I used my trusty Scor-pal and this time I cut a window into the pink box lid and stuck down some slightly opaque acetate to the back so the dress could be seen though.
Posted by Brenda Scowcroft at 15:21 No comments: 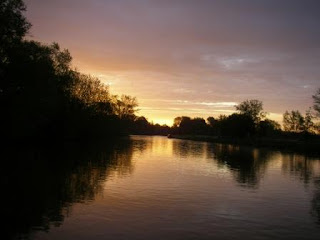 Dawn at Abingdon. We left at 0545 and did all the locks by ourselves (2 with electric and 2 without). A quick trip into Oxford looking for a pub showing the football but came back to the boat disappointed.

The moorings at Oxford are still a disgrace and BW had closed off the towpath so getting into the town was made difficult with a detour. So we upped sticks and moved off to one of our favourite spots just above Kidlington Green Lock. 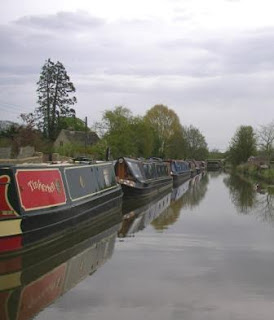 Sunday we moved on through the showers, Thrupp was packed and we continued on and then today it was raining. We set off in the rain and stopped after a couple of hours. Then at about 1100 the rain stopped and the weather was really muggy. We decided to press on and stopped just past Aynho. 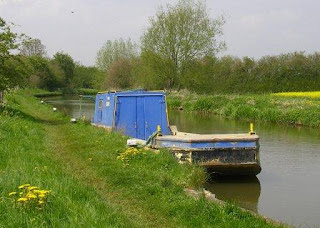 See the BW boat on the lock landing at Somerton Deep Lock!!! And on a bank holiday when the canal is really busy. 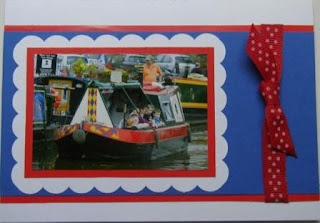 Another card in my Canal series. A picture of a day boat at Skipton. I matted the photo onto red card and then a white shaped card (done on my Craft Robo). I then matted this onto a larger piece of blue card and red card and tied a red and white polka dot ribbon around it. Then I fixed it to the white base card.

Posted by Brenda Scowcroft at 20:39 No comments: 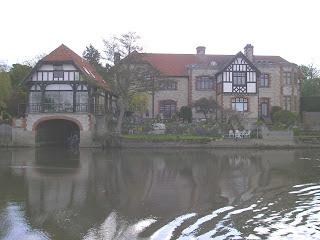 Don't you just love this house? I'd be happy with just the boathouse though! It's on the bend at Shillingford with a fab view upriver.

We spent last night at Goring below the lock. There were lots of showers and the yellow boards went up. Then we left this morning at 6am with another boat (an ex lock-keeper). They only went to the next lock so we were on our own again.

After 6 hours we reached Abingdon and moored up by the park. Such a pretty town, pity the shops are so dire.

There are lots of boats about and the barbecues have come out (either that or the boat opposite has just caught on fire!). And Maffi and Bones have just moored up on the opposite bank. 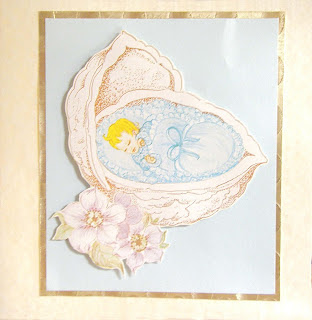 This card was recycled. I originally bought the baby card while I was in Budapest (20 years ago) but never used it. It was looking a bit tatty so I cut out the "walnut shell" and flower and matted it onto blue card with sticky fixers. I then matted that card onto gold card and then onto a square white card.
Posted by Brenda Scowcroft at 19:40 2 comments: