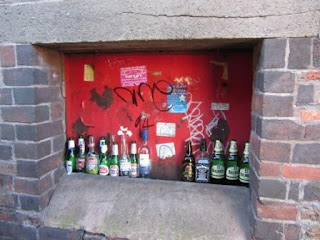 These bottles were neatly stacked in the hatch by the Gas Street entrance.  I suppose it is one step better than bunging them all in the canal.  They have since been tidied up by our "Volunteers" and replaced.  So it must be the same person who leaves them there.  He must be permanently sozzled.

Incidentally, the hatch was built into the original canal bridge and is for the fire brigade to put their hoses through to collect water in case of a fire.  You can see them on all the canal bridges on the BCN - all painted red. 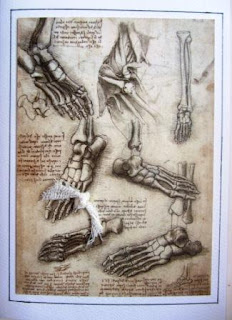 How is this for serendipity.  Kathy, one of our moorers has gone into hospital to have a bone in one of her little toes removed.  I was thinking of making a card for her, but what?

This morning we went to the da Vinci exhibition in the Birmingham Museum (only about 20 drawings but fabulous ones) - and there was this drawing of feet.

I had already seen a card made using an x-ray photo of a broken bone and the bulb flashed.  So I bought a postcard and made two slits each side of the little toe bone on one of the drawings the wrapped a sliver of bandage through the slits and tied it in a knot at the front.  The rest was easy.  I just stuck the card onto the front of a white card blank and then drew a box around it with a black fine-liner pen. 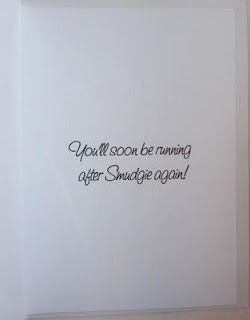 The insert was printed on the computer and that was it.

I had thought of doing the wording in mirror image (like the writing on the card), but I couldn't remember how to do it in Word, so gave up and just it it normally.
Posted by Brenda Scowcroft at 18:20 No comments: 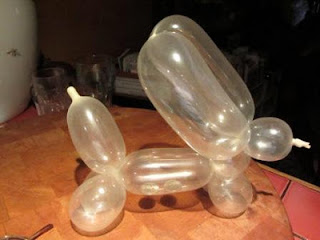 A while back we had a boat moored by the Hyatt with a lovely couple on board.  One of them made things with balloons and one of his party pieces was to make an animal and then "pop" in a couple of coins. 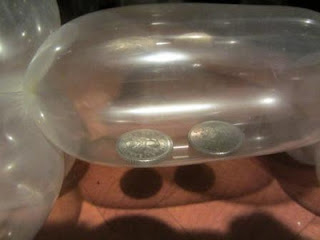 Here is the close up.  Pretty neat trick eh?

We have had a bit of ice recently - though not much to shout about, fortunately.  This picture shows the seagulls "walking on water".  One of our moorers insists on feeding them every morning and they then thank him by crapping on all our boats!  Why we have got seagulls in the most inland part of the country though, I will never know. 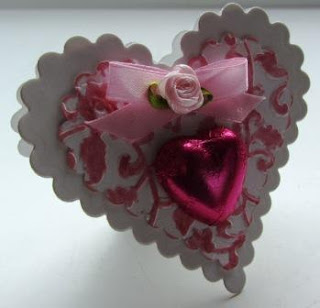 Time for the Valentine cards I'm afraid and this one is FOR SALE!

It is 10cm x 10cm and has a chocolate heart in the middle.

I made it by folding a piece of white card in half and then using the heart die to cut it out making sure that the top overlapped the fold.  I then cut another white heart the same size and stuck it on the front of the card so the fold did not show.

Then I cut a smaller heart and ran it through the Cuttlebug to emboss it and coloured in the embossing with a marker pen.  This was stuck onto the front, adding the bow and rose and the pink foil covered chocolate heart.
Posted by Brenda Scowcroft at 10:54 No comments:

Ice in the water!  First time this winter.

We are having trouble getting our TV to work.  The satellite dish, which worked perfectly in the old mooring, will not pick up a signal from the new one.  So we bought a huge great big super duper thing which got Freeserve no problem.

Then Brent came along and said we didn't need such a big one, and that a small one with a booster, like his, would be fine.  David decided we should get the smaller one so that we can take it with us when we cruise and if the satellite doesn't work we can use the smaller one.

The new aerial worked fine all day until about 5pm and suddenly it isn't working very well.  David has gone off to bed to read his book.  Not a happy bunny! 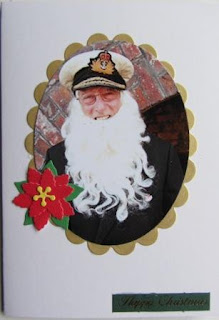 Earle, from Sherborne Wharf asked me to make some Christmas cards using this photo which was taken while he was being filmed for a video about the Titanic.  He is wearing his Father Christmas beard so it sort of fitted in for Christmas.

Well, his wife, Toni, wouldn't let him send them as it was only him in the picture so he asked me if I could change them into Moving House cards. 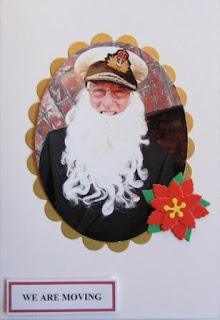 So this is what I came up with.  I took of the "Happy Christmas" sentiments off  and covered the damaged bit with the new sentiment.  Inside I added a new insert with the new address on.  And voila!  New cards.

For the card; I die cut the photo with an oval Nestability and then cut out silver or gold scalloped ones for the frame.  The poinsettias were cut out with another die (not sure whose) and  they were stuck on randomly.  The Christmas sentiment was bought.

For the new sentiment I made word boxes in Word on the computer and added the sentiment, then I made a thick red border before printing them onto card and cutting them out.

I have also made my own templates for the inserts, in Word again, so I just have to chose the size of the insert and just fill in the details.  Easy Peasy!
Posted by Brenda Scowcroft at 21:35 No comments: 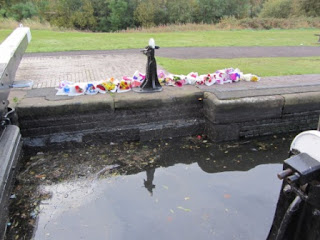 We finally got around to joining the Birmingham Canal Navigations Society (only 10 years late) and went off to Smethwick for a working party before their Bonfire Meet.  A couple of days before the meeting two young people fell into the top lock and drowned.  These are some of the tributes.

We spent the day clearing weeds from the towpath and the next two days stiff as boards! 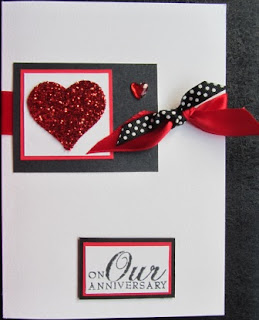 This card was for Spanish Dave, our neighbour on the moorings, for his wife on their anniversary.

It was cased it from a blog, though changed it a bit as I didn't have the right sized stamp for the sentiment.

I die cut a heart from red card and covered it in several layers glitter glue, finishing off with some lacquer to make it stick.  Then I matted it onto white and red card and then onto black card leaving one edge longer than the other three.

Some red ribbon was wrapped around the front of the card (I cut a slit in the spine just large enough to thread the ribbon through and then stuck the ends onto the back.  I then tied a knot with a piece of red ribbon and some black spotty ribbon.

Originally I stamped the sentiment directly onto the card, but as usual, I messed it up!  So I stamped it again and then matted it up onto red and black card.

I made an insert which was stuck over the back of the front of the card, hiding the ribbon ends.

On the original card a small "Anniversary" was stamped in white on the black edge of the card, so I added the red heart gem as I felt it just needed something.
Posted by Brenda Scowcroft at 16:52 No comments: 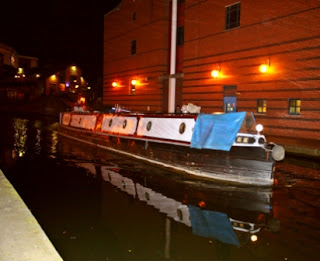 Now to catch up with what has been happening here.


Message to Andy.  Have found the map, no date but it shows all the branches.  Pop in anytime to see it. 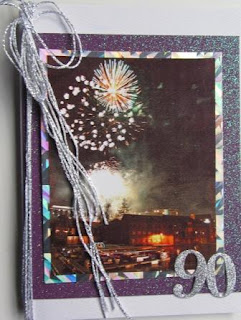 Mike, one of our moorers, needed a card for his Mother for her 90th birthday.  Something showing the boats.

So I matted a photograph of fireworks over Gas Street Basin onto silver holographic card and sparkly purple card.

Then I added a sparkly silver "90" (which I straightened before it was picked up. 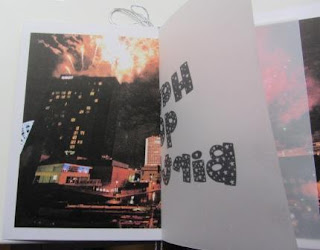 I printed another picture directly onto the inside of the card.  Forgot to photograph it before finishing the card.  Oops! 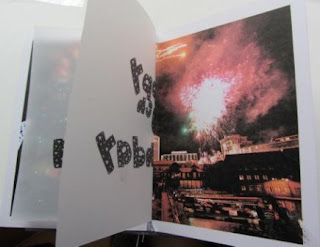 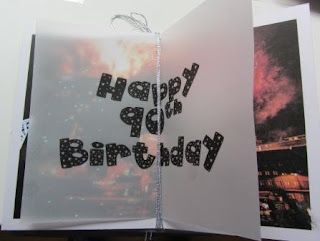 To finish off I printed the sentiment onto sparkly vellum (4th of July font) and tied it all up with strands of silver cord. 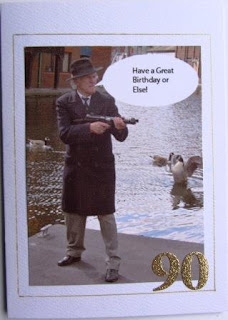 Mike then wanted this card made.  An old photo of Pete with a speech bubble and the sentiment: Have a Great Birthday or Else!

I stuck the photo directly to the card blank and drew a gold frame around it, added a sparkly gold "90" in the bottom right hand corner.
Posted by Brenda Scowcroft at 21:09 No comments: 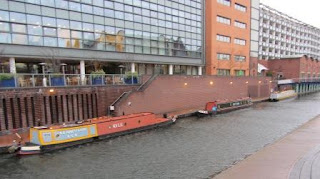 Noticed these three boats hunkering under The Bank, Kyle, Frank and Sam.  A very stormy day, gust of wind throwing the boat against the moorings and heavy rain.  Still, could have been worse, could have needed to wind at Salvedge Turn.  The Cube building funnels the wind straight down to the Mailbox - nearly blew me off my feet.
Now for the card.  Dreaming of Summer already. 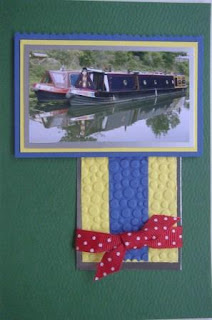 A Green card base.  I Cuttlebugged a strip of yellow card and then added another strip of Cuttlebugged blue card on top.  This I matted onto silver mirror card and wrapped a dotty red ribbon around, tying the ends in a knot.  This was then stuck down onto the card.  The photograph was matted onto silver, yellow and blue card and then stuck over the other topper.
Posted by Brenda Scowcroft at 17:03 No comments: 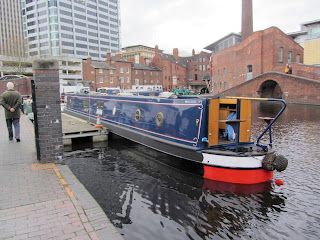 Guess what my New Year's resolution is?  And it's not as if nothing has been going on in the last three months either.

Hope you all had a lovely Christmas and are not too overhung this morning.

No fireworks last night, Birmingham Council, in their wisdom, moved the show to Victoria Square and had a "low-level pyrotechnic display" ie: didn't want to spend any money.

We have finally moved onto our new mooring.  It has only taken a year and we still have not got an electricity card reader, so are still plugged in to the old box.

Moving across the Worcester Bar three weeks ago, we were surprised at how much quieter it is here and there is so much more light and the views are much better.  From the bedroom window I can see Broad Street Tunnel and the lights at night are very pretty.  In the other direction I can see right down towards the Cube. 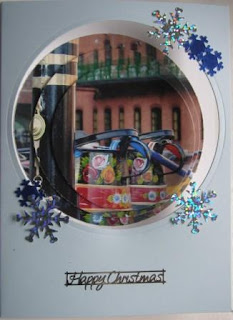 Here is a late Christmas card (must have got stuck in the Post!).  A picture of Mike's chimney and Buckby cans cut into circles with Nesties and inverted (outside on the top and smallest one at the back).  I also cut a circle into the front of the white card blank and stuck the photo behind the hole.

To finish off I added sparkly blue and holographic snowflakes and a peel-off sentiment.
Posted by Brenda Scowcroft at 13:01 5 comments: