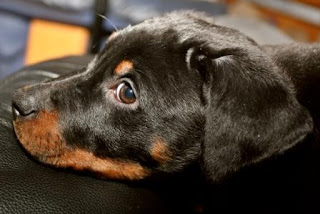 What do you think of this little beauty? Her name is Rolo (dark chocolate and creamy toffee). She is 6 weeks old and a Rottweiler/Doberman cross. She belongs to our daughter but we got to babysit her last Saturday.

She was great fun and spent most of the time asleep on David's lap (while he snoozed in his chair!).

Not much been happening on the boat front. We have 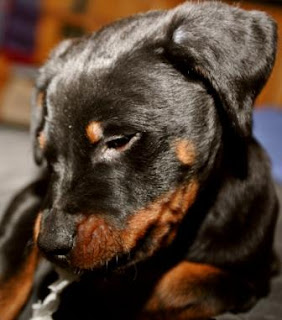 had the boat passed for the Boat Safety Certificate and Gareth also checked over the engine before our trip. David has changed all the filters, so we are read for the off in 3-4 weeks time. The only fly in the ointment is the stoppage on the SU, but, hopefully that will be fixed by the time we get to it.

Mind you, it snowed this morning!! 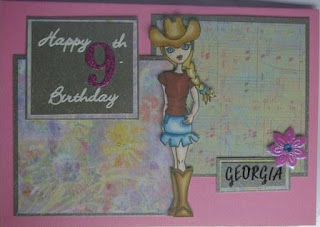 A card for Kathy's granddaughter. She provided the photographs of herself, granddaughter, grandson and daughter which was already collaged.

The collage was so large I had to make the base card from an A4 piece of pink, pearlised card.

I used four different but matching pieces of patterned paper throughout the card, matting two square pieces onto silver card and sticking them to the front overlapping in the middle.

The girl is a digi stamp which was already coloured. I had intended using a different one but the ink began running when I started to colour it in, so I had to go with this one.

For the two sentiment pieces I matted the silver card onto patterned paper and then more silver card using sparkly peel-offs for the words and number. 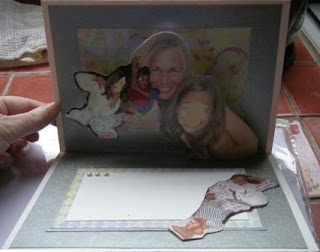 I covered the inside of the card with more silver card and stuck a piece of patterned paper onto the top flap. I made a "pop-up" for the pictures by sticking two strips of card into a box shape, sticking the long sides to the picture with the longest flush with the bottom of the collage. The other long sides were then fixed to the card so that when the card is opened the collage touches the bottom of the flap. 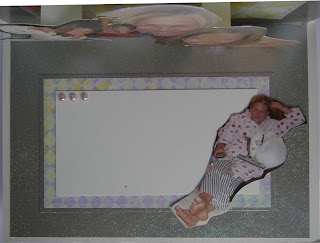 You can see on this photo the tops of the strips of card behind the photos.

For the personal message I matted some white card onto more patterned paper and silver card, sticking it in the middle of the bottom flap. The photograph was added in the right hand corner because in the original collage it was too big for the card; so I took it off and added it here. The final touch was the three pink pearls in the top left hand corner.
Posted by Brenda Scowcroft at 18:41 No comments: 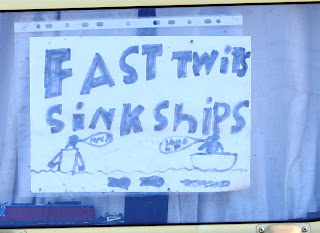 Why do you usually see signs like this on boats which never seem to move?

Being iced in on a narrowboat is, usually, no big deal unless it goes on for too long. Three weeks and we are beginning to get desperate for a pump-out.

The plan was go go around to Sherborne Wharf on Christmas Eve before the boatyard closed until 4th January, but of course we were iced in so that was out of the question.

Earle said that if we went around while it was closed Brian would open up for us, so around we went - found Brian and he started up the machine only to discover that it was broken !?*!

So, on the 4th the ice is back !?*! though only very thin and not enough to stop us this time. There was a queue (of course) but the deed was done finally and we are OK for another three weeks.

Today we went for a walk down Farmer's Locks to visit Caroline and Curtis, their new Rottweiler/Doberman cross puppy! (don't ask) and watch the Liverpool/MU football match on their super dooper large screen TV. Only we forgot the telephone and they live in one of those flats where you can't get in and the intercom doesn't work any more. So we had to come back to the boat to watch Liverpool lose yet another cup this year. 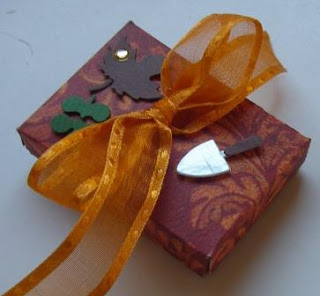 Now for something completely different. Not a card this time.

I entered this item in a competition and didn't win anything, again.

I made a small box and added a concertina booklet inside using leaf, insect and garden toppers to decorate it. To finish off I added a ribbon to close the box with a bow.

This is a picture of the top of the box with the bow keeping the lid on.

This is one side of the inside. 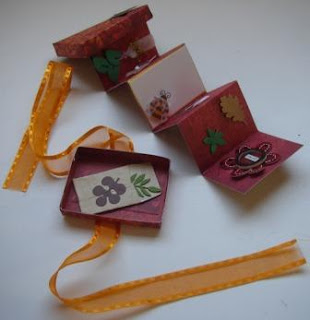 And this is the other side and the inside of the lid.
Posted by Brenda Scowcroft at 18:01 No comments: 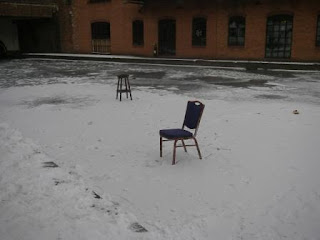 Well, the ice has almost gone. This picture was taken a few days ago. Originally the chair and stool had just been thrown onto the ice, then the next night someone went out onto the ice and stood them up!

We managed to get water by using the tap in the sanitary shed, passing the hose across the lock and using lots of connections and hoses then having to set the water flowing before the hoses froze again. The proper tap has now defrosted and there doesn't seem to be any damage to the pipes. 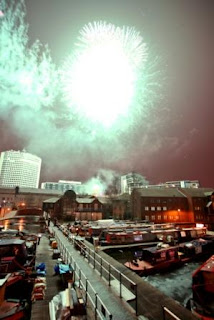 Then at midnight, last night, the fireworks. There can't be many moorings where you can get a sight like this every New Year.

Now we have a new cruising season to look forward to. The plan is to go up to Liverpool for the boat show there, and maybe the Grand National. Then to Leeds and back in time to meet up with Wildflower for a trip down the Nene and up the Ouse and Cam. And somewhere in there, two weeks in Spain with Caroline and Curtis! And what with a new mooring, a busy year ahead. 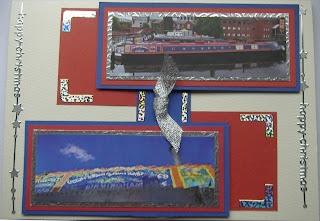 Two cards. The last Christmas Card this winter. This one was for Bruno. I used the photographs from the other ones I made for him this year, matting them onto silver, red and blue card.

I added two pieces of red card and a blue strip for a "background" adding holographic peel-off corners and strips for some bling and a silver ribbon tied in a knot and wrapped around the blue card. The pictures were then added. To finish off I used some "merry Christmas" peel-off strips. 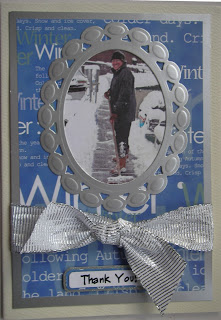 The second card is a "Thank You" to Hannah (Cubie). She spent hours sweeping away the snow off the pontoons. It was almost a full-time job.

I matted a piece of "winter" paper onto some silver card, wrapping some silver ribbon around it, tied in a knot, before sticking onto the white card blank. I used one of my new Nestabilities to cut out a frame in silver card and fixed the photograph of her behind it. To finish, I printed out a "Thank You" on the computer and matted that onto more silver card before adding it below the ribbon.
Posted by Brenda Scowcroft at 12:13 No comments: