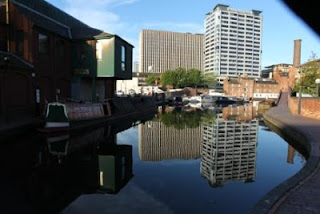 A still morning in Gas Street.

David managed to wrangle an invitation to the CRT AGM held in The Bond, actually by the canal near Dibeth and not in the wilds of Milton Keynes.  He managed to make himself known again by asking a couple of awkward questions.

Though there are the same faces in the same jobs, there does seem to be a glimmer of hope that boats, boating and navigation are heading up the  To Do List. 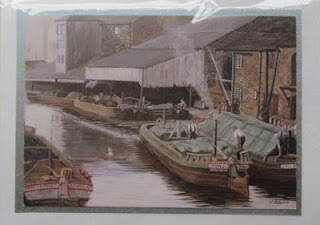 Not quite The Bond, but a similar wharf.  This is the Blackburn one on the Leeds and Liverpool Canal.  I took the postcard and matted it onto silver card and then onto a white card blank.
Posted by Brenda Scowcroft at 17:34