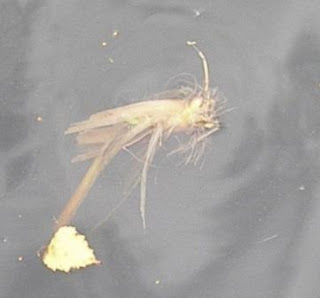 Things that are not what they seem. The picture is of a bull rush root - it just looks like a great big locust floating in the lock.

Finally, we've got away! On Tuesday we set off at 0900 and got as far as the Soho Loop before we had to return to Gas Street with water pouring from the engine again. Sandy was still away at the IWA Festival and we had to ask around to find someone else to look at it.

So on Saturday, with a new cap thingy we set off again at 0630 - but only got as far as the junction with the Old Line before having to return with the same problem.

Finally, with some new hose and a new cap, this time with the rubber gasket that it needed we set off this morning at 0515!! Determined to get away. Who needs a boatyard anyway?

David let me lie-in when we set off and it was magical with all the lights reflecting through the portholes. I had my very own disco ball light show.

Because we are almost a week late in setting off we decided when we got to Wolverhampton that we would continue down the locks all in one day (a first for us). As we came out of the tunnel there was a boat just setting off from the water point, going in our direction and as we got to the locks there was yet another boat in the lock, also going down. So David had a quick 40 winks for an hour to let the boats get out of the way. Meanwhile 2 boats came up the locks - so we thought we would have most of them for us. Wrong! Though we never saw the boats in front we only got 3 locks that were for us until we met another boat coming up, then another 3 locks for us. As we got towards the bottom there were 4 boats coming up - so the last bit was easy.

We moored up on the Staffordshire and Worcester Canal at the first available bit of piling. A bit close to the motorway - but not as noisy as Gas Street last night and after a quick, late lunch spent the rest of the afternoon asleep. 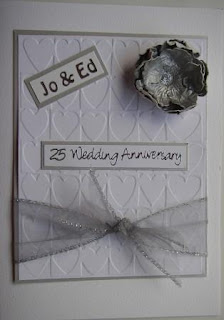 When we were returning on our second abortive trip out a man on a hire boat stopped us as he wanted an anniversary card for their friends on the boat behind them. I asked if he wanted me to make one and he said that he didn't have time. So he bought two cards (he liked them both). We moored up the boat and he turned up again. He was taking on water in Holliday Wharf, and could I make him a card after all?. I had 1/2 hour while the watering went on.

This is what I came up with. A large white card. I Cuttlebugged the hearts onto white card and matted it onto some silver card. I wrapped a scrap of silver organdie ribbon around, tied in a knot and fixed at the back. This panel was then stuck to the card. I made their names and the sentiment using peel-offs (it was a quick card after all!) which I matted onto silver card and stuck down with sticky fixers. To finish off I found this lovely silvery handmade paper flower which I've had for ages and wanted to use up.
Posted by Brenda Scowcroft at 18:50