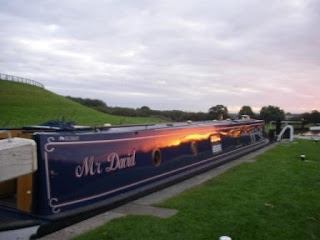 It really feels like we have been out in the back of beyond Internet-wise. We have had no Vodafone signal since I last blogged. It got so bad we took the computer and gubbins into a Vodafone shop in Shrewsbury, just to check that it was still working. It was.

Anyway, I will catch up eventually - please bear with me. I've had 83 emails so sort out!

We spent last night above Hurleston Locks, ready for the morning - but we were alone. The sun was just coming up as we entered the 2nd lock and the boat looked like it was on fire.

Phoned the Wigan BW office regarding our trip into Liverpool next month. Banged my head against the wall several times. The form definitely says (and I quote) "The maximum duration in Saldhouse Docks is 14 days inclusive". But when I tried to extend our stay up to 14 days, I was told that it was only 10 days and that included the 2 nights in Eldonian Village. Work that one out. 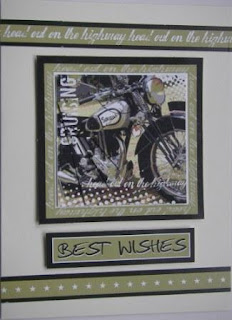 A cheat's card. Though sometimes it is nice to just pop a few pieces of card pre-printed and cut out and just stick them together with sticky fixers. It is a "twisted" decoupage, though it doesn't really show up in the picture.
Posted by Brenda Scowcroft at 18:56

Bearing in mind the low number of boats that seem to be using the Link, it seems stupid that they have reduced the number of days to 10.
Might be worth an email to complain.