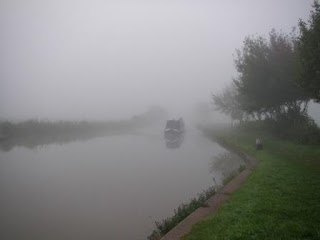 Mr David emerging through this mist this morning.

After a very clear, starlit night we woke up to a very thick mist which lasted until almost 10am.

David bought some relatively cheap diesel from the Kings Lock Chandlers while I nipped into Middlewich Tesco for some groceries and I met him just as he had the gates closed in Wardle Lock. Maureen was out helping with the lock and looking well. (We missed her both times earlier this year, so it was nice to catch up). She had a good old moan about selfish and unhelpful boaters and sent us off on our way with the words "Now you're proper boaters!" There's a compliment!

There are still lots of boats about, but it seems to be settling down a bit now. There are several of us on our way to Llangollen, leapfrogging each other during the day. David met one poor couple the other day who had a mooring 300 yards from the Shebden Embankment. Unfortunately it was 300 yards on the wrong side of the hole and they were having to travel right around the 4 Counties Ring to get back home! 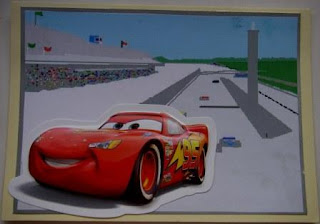 I found some puffy stickers of these Disney Cars in a Pound Shop. The background is a clipart that I have titivated a bit on the computer before printing onto card and matted onto silver paper. And that's it!
Posted by Brenda Scowcroft at 20:00