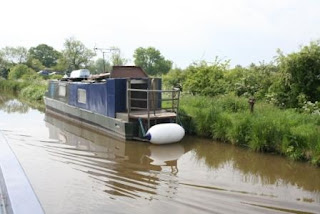 We saw this boat earlier this year on the Shroppie. It must have the biggest fender on the cut.
Anyway, when we were travelling back from the boatyard last week we saw it again moored up near Cadbury's.
Yesterday evening, when I got back from my stroll around the "bay" we had visitors. Sue and Gail. Gail used to run the hotelboat Katie but has since moved on land and lives in South Shields. It was lovely to see her and catch up on all the news. It also gave David a chance to show off our new "house wine" - Chateau David.
David has had a bad day. England were all out and lost the cricket match in the morning and then having been invited to Caroline and Curtis to watch the Charity Shield on their big screen in HD, United managed to lose that too. Not helped by Curtis being one of the ACBMU Club. 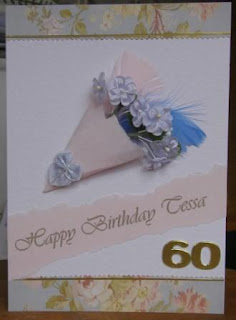 I made this card years ago, don't know why I have not uploaded it before.

It was made for Tessa, who used to moor here and she has been gone for about 18 months now!
I used a large card base and put a strip of floral paper top and bottom and a strip of peel-off along the joins. Then I made a cone with some white paper and added blue and white silk flowers and a pink and a blue feather fixing them with a sticky dot in the bottom of the cone. A small blue bow covers the bottom of the paper cone.
To finish off I printed off the Happy Birthday sentiment onto vellum and wrapped it around the front of the card. 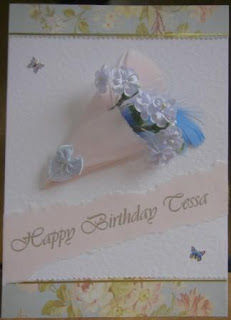 I wasn't too sure about the 60, and after taking advice it was removed and a couple of butterflies were added.
Posted by Brenda Scowcroft at 21:19