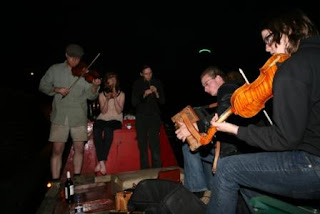 I have been up to my eyes in wedding stationery for our daughter Caroline's wedding which took place yesterday.

Everything went to plan except for the weather, but it did manage to stop raining for the photographs. She was married to Curtis at Eastnor Castle in Ledbury, so we spent last night in a four poster!

Now we have got our lives back I can start blogging again - and maybe even go on another cruise. We missed the 10th anniversary of being on Mr David last week, I didn't remember until two days after the event. At some stage we had a visit from Jan and Bowman from Rivendell who we met on the Leeds and Liverpool earlier this year and he and David managed to get through half a bottle of whisky - so no-one remembers much about it.

On Friday night we accommodated an very old working boat called Spey crewed by a group of young people (calling themselves The Young Friends of Spey) - see the picture above. They repaid us with Pimms and wonderful English folk tunes (well until one of them dropped her flutey thing in the water.

IF YOU ARE EASILY OFFENDED DO NOT READ ON ANY FURTHER

I made a Thank You card for Sidney, the owner of the Legs Eleven lap dancing club for his present of a bottle of wine. This is it. 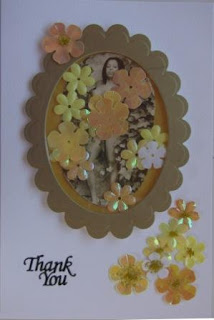 I found the picture from the Legs Eleven Website (quite an eyeopener in itself) and made a shaker card using my new Nestabilities for cutting and embossing the frame. I added sequin flowers to cover her modesty

if you jiggle it about a bit, 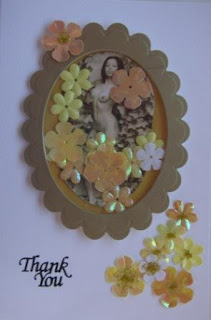