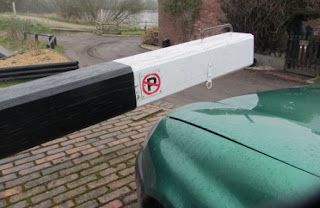 Another cold day.  The driver of this car does not seem to be able to read a sign.  It is at the bottom of the Curdworth locks and was so close to the lock beam that I had to push against the bumper to get the gate open.  I was hoping that it would set the alarm off, but no such luck.

So, on up the pretty Curdworth locks, with daffodils trying hard to burst open and then the 3 Milnworth locks. 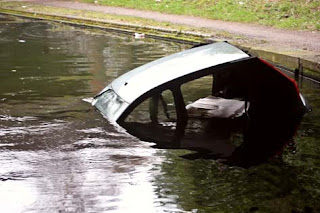 Just before the long factory bridge David had to get around this car.

We emailed the Fazeley office to report it and Rachel said we could have salvadge rights if we could get it out.

We finished up at Cuckoo Wharf.  We've never stayed here before.  There are visitor and long-tern moorings here plus a work boat mooring.  The work boat seemed to be partly on the visitor mooring, so we moored up on an empty long-term mooring. 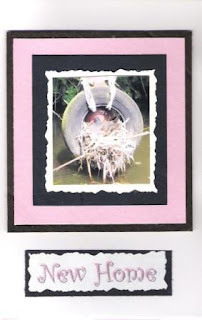 Not very clear, but it s photograph of a moorhen on her nest made inside a tyre finder.  The photograph was taken by the Bishop of York's Palace.

I matted the photo onto white card, cut the edges with deckle scissors then matted it again onto navy, pink and more navy card.  It was stuck onto the front of a white card blank.

The sentiment was printed on the computer, cut with the deckle scissors and matted onto navy card.

Posted by Brenda Scowcroft at 17:13