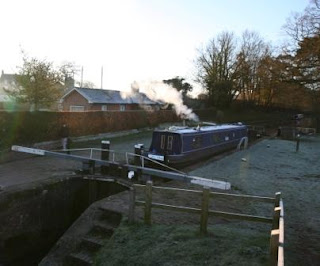 What a fantastic name - Coole Pilate - not got a clue what it means. Also, the Shropshire Union Canal Society (SUCS - love that too!) have made a great mooring area with tables, seats and barbecues.

You could tell that David was feeling better today - we set off at 0630 this morning in a heavy frost. This is the boat in Audlum top lock.

We passed one boat on the upper flight and then there were three Middlewich boats waiting to set off just as we came to lock 12. They let us go through, so we were not suddenly No 4 in the queue.

We managed to get water from outside the Shroppie Fly (the boat we past going up said it was frozen when they had tried earlier), and I popped into the Co-op for a newspaper and some bread, then it was down the rest of the locks in brilliant sunshine and on to the mooring here. 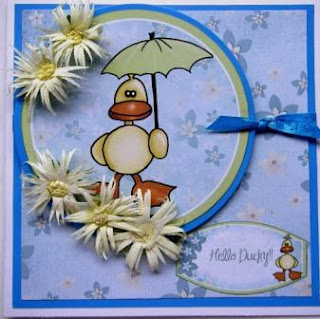 A cute little card using some papers from a card magazine. I used a square, white card blank and covered most of the front with blue card and then some blue flowery paper. Before I stuck it down I wrapped some blue ribbon around the middle and tied it with a knot.

The circular topper was also matted onto blue card and added onto the front of the card. Several white daisy type flowers were added with glue dots to the circle and a sentiment was added to the bottom right hand corner.
Posted by Brenda Scowcroft at 18:40